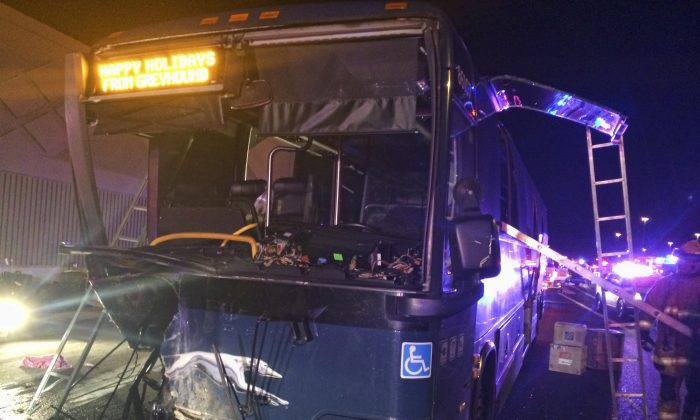 The remains of a Greyhound Bus after it was hit head-on by a car being driven the wrong way on Interstate 10 in a Phoenix suburb, on Nov. 25, 2016.(Arizona Department of Public Safety via AP)
US

Arizona Department of Public Safety officials said the bus driver “did an amazing job” keeping the vehicle upright after one of its front wheels was damaged in the high-speed collision.

Rescue personnel used ladders to extricate at least three injured people on stretchers and helped others climb out of the bus through an emergency window and the torn-open front end, DPS Capt. Tim Mason said.

Twelve people from the bus were released from hospitals after being treated for minor injuries, and one person was being held for overnight observation.

Dozens of firetrucks and ambulances from several agencies responded because of the possibility that the wreck might have been more serious than it was.

The impact to the bus’ right front corner bent a wheel beneath the vehicle, and Mason credited the driver with managing to keep it standing.

“The bus driver did an amazing job to keep control of the bus and bring it to a controlled stop,” Mason said.

The bus stopped about 1,000 feet beyond the point of impact, while the car was broken into three sections, police said.

The casualty toll would have been worse if the car had hit another car or pickup, not a large bus, Mason said.

“The results would have been devastating,” he said. “If that was a passenger car, nobody would have survived that crash.”

The crash closed the freeway’s eastbound lanes for more than seven hours. It comes a month after a tour bus crashed into the back of a tractor-trailer on Interstate 10 outside Palm Springs, California, leaving 13 people dead.