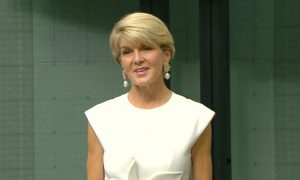 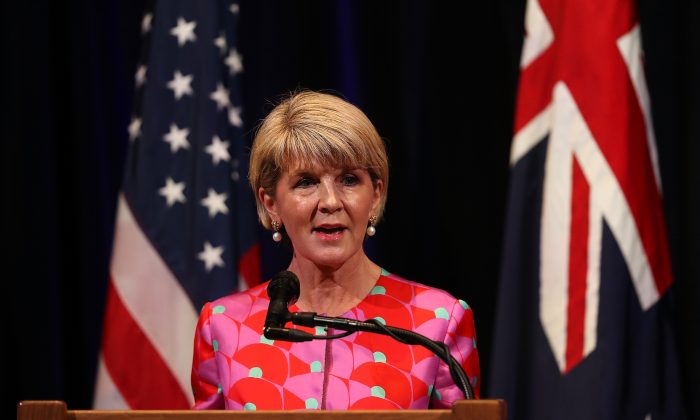 Australian Minister for Foreign Affairs Julie Bishop speaks during a press conference at the Australia-U.S. Ministerial Consultations (AUSMIN) at the Hoover Institution on the campus of Stanford University on July 24, 2018 in Stanford, California. U.S. Secretary of State Mike Pompeo and Secretary of Defense James Mattis are participating in the two-day AUSMIN forum at Stanford University. (Justin Sullivan/Getty Images)
Australia

Former foreign minister Julie Bishop has called on China to fulfill its international obligations and support an investigation into the global pandemic.

Speaking to Channel 7’s Sunrise on April 30, Bishop said an investigation is “essential” to determine whether this might happen again.

“There must be an investigation into how the virus got into human populations, wherever it was first reported so that we can be better prepared; so that we can determine whether the virus could have been contained,” she said.

China has a unique responsibility to uphold international peace and security as a member of the United Nations Security Council. Bishop believes the pandemic has been a threat to international security because of its disruption to the global economy and societies.

Bishop pointed out the precedence of an inquiry into the Ebola outbreak. “I do believe it is essential for there to be such an investigation, and there have been in the past,” she said.

Bishop also said it was not the time for “threats or coercion” by China, given the international community is amid a global pandemic.

Australia and China are currently experiencing an increase in diplomatic tensions after the Chinese Ambassador tried to use “economic coercion” to halt Australia’s probe into the origins of the CCP (Chinese Communist Party) virus, commonly known as the novel coronavirus.

Chinese Ambassador Cheng Jingye on April 26 said in an interview with the Australian Financial Review that if Australia continues to probe into the origins of the CCP virus, the “Chinese public” may avoid Australian products and universities.

The Department of Foreign Affairs and Trade (DFAT) on April 28 then in a rare step, released a statement calling out the Chinese embassy for breaking protocol over its release of diplomatic communications between the embassy and DFAT Secretary Frances Adamson.

Prime Minister Scott Morrison said in a press conference on April 29 that Australia would continue to pursue an independent assessment of the COVID-19 pandemic since the virus had taken more than 200,000 lives globally and shut down the world economy.

“We don’t lightly form the views that we do on these things, and we hold the position that we have,” he said.

The prime minister also noted that Australia was not pursuing a “targeted attack” but rather “a very reasonable and sensible course of action.”