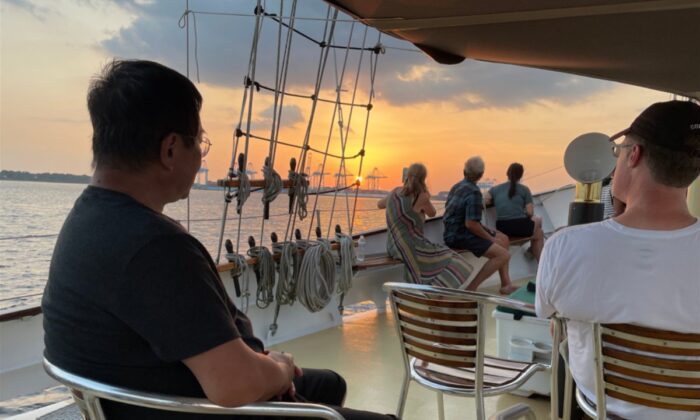 If you meet Shi Shan for the first time, you will not have guessed he is from mainland China, as he doesn’t carry himself so.

Curiously, I asked him once where he was from, and where his home was. Shi was a bit stunned, but his response probably resonates with more people than he realized. “Where am I from? I have been trying to figure that out myself. I was born in Guangzhou, then shortly afterward I moved to Beijing. ” He did not stop there. He continued moving around to different areas in China, such as Sichuan and Tibet before ending up in Hong Kong. After his Asian adventure, his ship set off again but this time to the UK and America. “When you ask me where I am from. I really don’t know the answer.”

That is part of a trait of being a global citizen.

“Hi, I am Shi Shan, a politics media expert, also a self-proclaimed “seasoned trekker.” That‘s how he introduces himself jokingly on his podcasts.

Somehow, from the second he stepped foot into the world, Shi was destined to be a wanderer. To Shi, home had always been wherever he settled. His wandering lifestyle was not full until he finally built something for himself: a career and a family. He has four children.

Interestingly, Shi has benefited from the Chinese culture that is inherited overseas. In his early years, when he migrated to the UK, he worked as a taxi driver. Shi recalled, “There were plenty of crimes of robberies, muggings, and ride and run passengers in East London. Fortunately, I never got robbed once in the two years of driving a taxi.”

People were heavily influenced by Kung Fu movies overseas, by martial-art artists such as Jacky Chan and Bruce Lee.

So when it was rumoured within the community that Shi Shan knew martial arts, no one wanted to mess with him. In fact, everyone in the neighborhood was very respectful of him.

Shi Shan left the mainland at the age of 26, shortly after the June 4 movement in Tiananmen Square in 1989.

When he arrived in Hong Kong, he only had HK$500 (US$64). He had nothing, nobody, no shelter, no direction. Feeling confused and overwhelmed, however, Shi immediately fell in love with the neon-light city.

He says the feelings were indescribable, but they gave him butterflies.

He didn’t know what it was until a long time later. That joy he felt was freedom.

Shi Shan’s feelings at the time were similar to Yu Ying-shih, a Chinese-American historian, sinologist, and scholar. Yu was a Chinese studies professor at Harvard, Yale, and Princeton Universities. Yu received the lifetime achievement award in humanity studies from John W Klug Prize in 2006.

In his memoir, he depicted an experience he had while crossing the Lowu Bridge between Shenzhen, China, and Hong Kong. It was a spiritual epiphany. “The weight above my shoulders suddenly became feather-light, and my body was like water in a state of stillness and calm.” Although the spiritual feeling dissipated within a second, that was the most unforgettable sensation Yu has ever had in his lifetime.

And like Shi, what Professor Yu experienced was freedom.

According to Princeton University’s website, “Professor Yu was known for his mastery of and insight into Chinese intellectual, political, and cultural history with an emphasis on his profound research into the history of public intellectuals in China.”

Finding Peace by the Sea

Shi Shan loves traveling when he is not working. Shi once took a large group of friends to Grass Island in Hong Kong. They all sat on the wide green meadows, overlooking the endless sea merging with the sky. Some cattle were relaxing on the other side of the slope.

As cold air gently breezed through, Shi immersed in the bliss and his music.

While the views on Grass Island merrymaking will never replace Shi’s favorite, which is the breathtaking night view from The Peak, overlooking Hong Kong.

Shi loves the sea. Having traveled around the globe, his favorite ocean can be seen in America. Shi has been living in Washington for many years. He sees the ocean from the highway, whenever he drives to work. To him, the ocean is tough and raw, particularly as seen from the Pacific Coast Highway in California. Perhaps the reason why he loves it so much is that it resembles his character.

The Ones Who Chase Freedom

Recently, Shi Shan has been traveling back and forth between Hong Kong and America for work. In the early summer of 2021, after his return to Hong Kong from the United States, Shi purposely visited Hong Kong’s outlying islands to bask in the sun.

Shi prefers Hong Kong’s climate to the United States. He thought he would be able to stay in Hong Kong for a long while.

Sadly, nothing worked in his favor.

In June 2021, Apple Daily was forced to cease operation due to Hong Kong National Security Law. After that, the media industry deteriorated quickly. Numerous news outlets also shut down one by one.

What Shi didn’t realize at the time, was that being able to tell the truth was a luxury, especially since journalists had been squeezed between two tight walls.

When he had to leave for America again, he was unwilling. He was pulling his hair, and said, “I am a wanderer.” This time the departure felt different: no one knew how long it would be before he could return again.

Familiar yet unsettling, the chills Yu felt were identical to what he felt living in China. They were reactions to fear.

Later, once he became an American citizen, he realized something: The meaning of freedom.

“We are born with the right to seek freedom and freedom from fear. When there is freedom, we rid ourselves of fear. When you harbor fear, you lose freedom.” To Shi, the message was clear.

Home is wherever there is freedom.

Shi is not the only one who seeks freedom. In June 2021, Shi went to the UK for interviews. He met many talented Hongkongers, who had migrated to the UK. These recently landed Hongkongers are carrying a significant amount of responsibility. They are now to share and pass on Hong Kong culture, art, language, and history.

Shi believes that Hongkongers carry a unique Hong Kong spirit and value, despite being stuck in difficulty.

As more Hongkongers flee their home as if they are running from a war zone, due to political uncertainty and National Security Law, Annie Zhang Jieping, Hong Kong reporter and columnist said in one of her interviews, “Be it Taiwan, Hong Kong or China, we are still living in the shadow of the Chinese Communist’s 20th-century war. Right now it is a state of “ceasing fire,” not “peace.”

From the way Shi Shan shares his life and travel experience, one can tell that he is a blend of the east and the west. When he talks about Hong Kong history, you can sense the passion he has for Hong Kong and Chinese culture.

Hong Kong is no longer the same after the 25th anniversary of the Handover.

Perhaps through the shattering of Hong Kong, Shi finally finds his answer, “All my life, I am a person without a home. But the joy freedom brought me in Hong Kong, has made it clear that ‘Hong Kong’ is my ‘Home Kong.’”

Hong Kong: A Haven for Chinese Traditions, a Heritage That Has Never Been Fully Explored