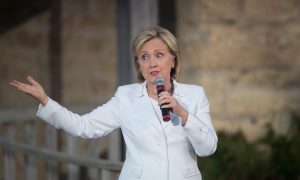 The New York-based company revives 5,000 years of Chinese civilization. The Chinese have long held their culture to be divinely inspired, explains the Shen Yun website. Buddhism, Daoism, and Confucianism had profound effects on the development of Chinese culture, until the atheist communist regime took control last century and nearly decimated the traditional arts.

Mrs. Newlove was impressed by “the spirit of the message, of how everything is transient, [and] that life is fleeting, and we must think of more eternal values than just material life.”

“They take to heart an ancient Chinese belief: that to create true art, there must first be inner beauty. Many draw personal inspiration from the values inherent in Chinese culture, and naturally bring a calm expressiveness to their work,” explains the program book.

“A spiritual life is of the essence, really,” said Mrs. Newlove, “We need a lot of truth.”

Shen Yun Performing Arts, based in New York, has three touring companies that perform simultaneously around the world, with a mission to revive traditional Chinese culture. Upcoming performances in the United States include Chattanooga, Tennessee on April 24, and Columbus, Ohio on April 26 and April 27.