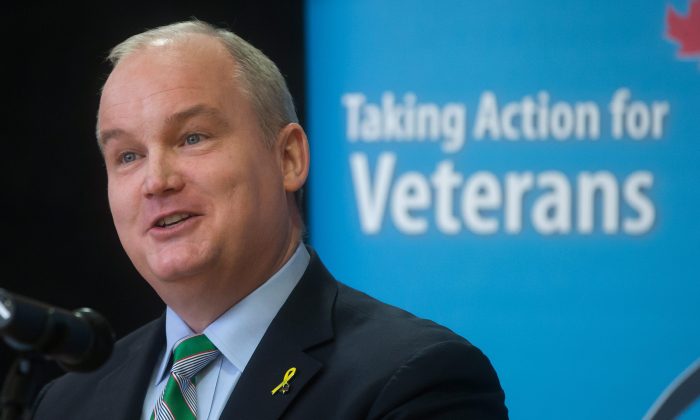 Veterans Affairs Minister Erin O'Toole announces improved benefits for veterans and their families during a news conference in Vancouver on March 17, 2015. A plan to enhance support for seriously injured veterans under the New Veterans Charter and proposed new support for informal caregivers such as family members was announced. (The Canadian Press/Darryl Dyck)
Canada

VANCOUVER—Canada’s Veterans Affairs Minister says his government is filling in the gaps by promising additional support to seriously wounded former soldiers and to the people who care for them.

“This constitutes an acknowledgment that the needs of veterans and their families are not frozen in time,” said O’Toole, after denying that his government’s recent initiatives and announcements amounted to an admission of having mistreated veterans.

“I think we’re trying to get the balance right and this is about getting it right.”

“The proposed changes we are announcing today would expand the eligibility so the criteria are less rigid and more veterans with serious impairments would qualify for this allowance,” O’Toole told a crowd of media and soldiers.

I think we’re trying to get the balance right and this is about getting it right.
— Veterans Affairs Minister Erin O'Toole

The new Family Caregiver Relief Benefit will provide an annual tax-free grant of $7,238 in recognition of what O’Toole described as caregiver fatigue, allowing family members to take “a well-deserved break.”

Migneault said on Tuesday she was pleased with the government announcement but was disappointed the initiatives did not go far enough.

Migneault also said she was concerned that the stipend still fails to recognize the value of support work by family members, who are still excluded from compensation through some veterans support programs.

“Right now (my husband) can pay the neighbour to accompany him but me, I cannot receive that money because I’m his wife,” said Migneault. “There’s a question of dignity.”

Migneault had asked that spouses be given counselling and training on how to cope with loved ones suffering from combat-related mental health issues, as well as better access to retraining opportunities.

Bruyea said the annual $7,000 caregiver stipend from Veterans Affairs amounts to “a cruel joke,” pointing out that National Defence has a similar attendant care benefit for families of wounded troops that pays up to $36,500 per year.

O’Toole has laid out a series of initiatives ahead of the federal budget and next fall’s election, which include a proposed new retirement benefit for wounded soldiers who don’t have pension and equal access for injured reservists to an earnings loss benefit program.

Each of the initiatives addresses long-standing complaints, particularly in the case of reserve, or part-time soldiers, whose plight has been highlighted repeatedly by not only the ombudsman but successive parliamentary committees.