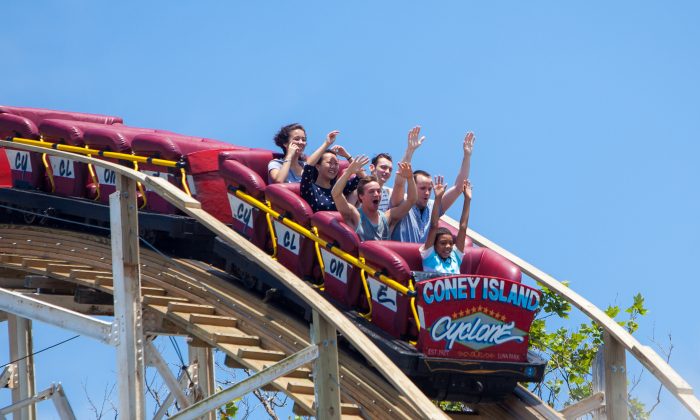 Would You Ride an 88-Year-Old Roller Coaster?

After Coney Island’s iconic roller coaster failed on the park’s opening day, new questions are surfacing over the safety of the country’s aging roller coasters.

The New York City Coney Island amusement park ride got stuck forcing stranded passengers to make their way down side maintenance ramps with the help of park staff. There were no injuries.

About 24 passengers in all were stranded at the peak of the ride’s first drop on the wooden structure. The Coney Island Cyclone had its maiden ride in June 1927, making it 88 years old.

The Cyclone is a renowned part of Americana, known in the roller coaster world as the “Big Momma” of Coney Island, and is a longtime tourist attraction.

The highest drop is an 85-foot, 60-degree drop that accelerates to 60 miles per hour.

After the ride’s debacle on Sunday the park described it on their Facebook page as “an isolated issue” that is “quickly being resolved.” The ride is being inspected.

Everyone who was on the ride when it broke down is being offered a free ride after it reopens. Based on responses to the Facebook post, though, it’s not clear whether anyone will take the park up on the offer.

“I’m sure they want to get back on the ride after a malfunction occurred,” wrote Laura Todorov. “No dice!”

Another past customer commented that the ride is a bit rough on a good day.

“Glad no one was hurt,” wrote Tighe Coney. “Last time I rode this old gal I got enough bruises getting slammed around in the car—its a rough ride.”

One woman who rode the Cyclone in its younger days back in the 1980s said she had a near mishap.

“I almost fell out of the Cyclone the one and only time I got in it over 30 years ago!” wrote Jeanette Garrod-Williams. “The bar was not secure and I was starting to fall out into the seat in front of me! We finally stopped going downward, which pushed me back into the seat!”

Though many others also complained that their past experiences on the Cyclone left them with whiplash, sore backs, and bruises, many people attested to the ride’s safety and the professionalism of park staff.

“I’ve been living in Coney Island for years … that ride its well maintained—before opening and after closing for the winter,” wrote Nicolas Roque.

Mike Shulman, who said he was there when people came down, praised the way staff helped everyone down.

“Watched the rescue,” wrote Shulman. “The workers are to be commended for their help and understanding.”

The Cyclone is not the first roller coaster in the United States to have a hiccup while the ride is in progress. Sometimes even newer versions of the classic amusement park ride have hiccups.

Just last week, the Incredible Hulk roller coaster at Universal Studios in Orlando, Florida, stopped running due to a glitch and a car got stuck on the tracks. A few dozen riders were safely rescued from the tracks by firefighters or walked to the exit platform. The modern ride features upside-down loops.