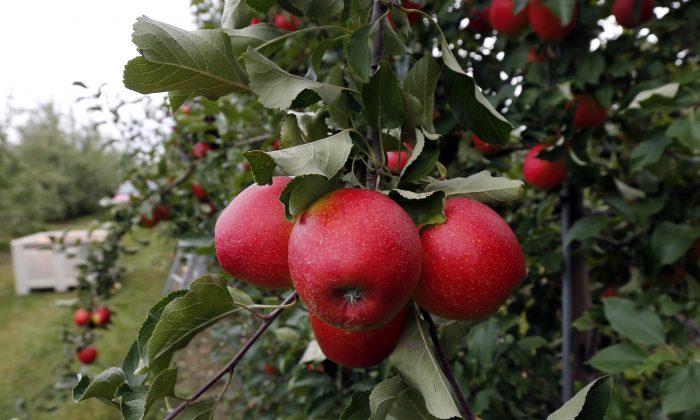 In this Oct. 14, 2014 photo, apples grow on a tree at Samascott Orchards in Kinderhook, N.Y. Apple growers are tapping into the hard cider revenue stream after sales of hard cider in the U.S. have tripled over the last three years to $1.3 billion in 2013. (AP Photo/Mike Groll)
GMOs and Biotech

GMO Apples: Would You Eat an Apple That Never Turned Brown?

Genetically modified apples that don’t turn brown were approved by a U.S. Department of Agriculture agency this week, and they might be coming to a grocery store near you.

The USDA’s Animal and Plant Health Inspection Service says it approved the genetically modified apples because they’re “unlikely to pose a plant pest risk to agriculture and other plants in the United States.”

The apples in question is called the Arctic Apple. The technology was first developed in Australia and later licensed by Okanagan Specialty Fruits in British Columbia, Canada. OSF has two non-browning varieties, Golden Delicious and Granny Smith. The apple is primarily designed for fast food restaurants and other food service companies that use pre-cut apples, but will be sold individually too.

“For our fellow growers, this means that Arctic trees can now be purchased and grown just like any other apple trees (so let us know if you’re interested in planting!),” the company says in a release. “For consumers, it means that we will be working hard to get as many trees in the ground as possible so that you’ll be able to purchase Arctic apples in stores within the next few years.”

But Okanagan’s enthusiasm isn’t shared by all.

According to a Change.org petition, which has nearly 7,000 signatures, “Allowing the Arctic Apple into the marketplace could open the floodgates for more than 30 GMO crops currently in the pipeline,” and they claim there’s “no long-term studies” about their safety.

It calls on the USDA and U.S. Food and Drug Administration to rescind approval for the Arctic apples.

The criticism against genetically modified apples is part of a larger chorus of anti-GMO sentiment that isn’t based on reality, says Ricky Twiggs Jr., the founder of Unchained Thought Enterprises—a consulting company that specializes in emerging technologies like GMOs and organic food preservation.

“I believe fully what in what Andrew Smith said, ‘people fear what we do not understand,'” he told Epoch Times via email. “If we are able to educate ourselves using peer reviewed scientifically backed research from both Europe and America we would feel much more confident and safe about what we are eating.”

“GMO’s exist all over the world, the large majority of them contain added vitamins, such as certain types of rice. This is most notably used in famine stricken countries which are in desperate need of food with a diverse genome to provide the nutrition that they need. We need food that lasts longer,” says Twiggs, adding that anti-GMO communities should read scientific peer reviewed journals, instead of disinformation sites.

“We need an education population of people who are not afraid of what they do not understand,” said Twiggs.