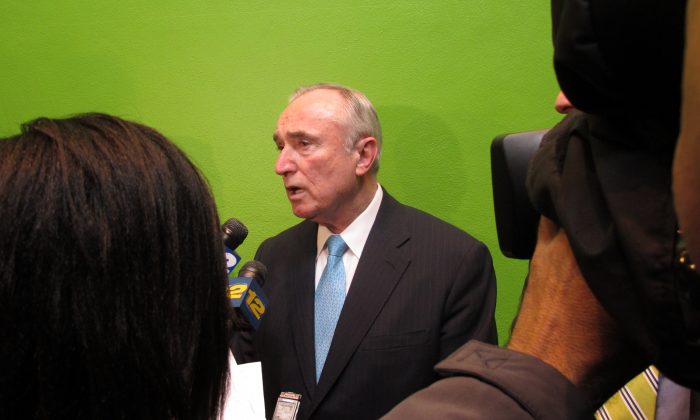 NEW YORK—Mayor-elect Bill de Blasio has just 43 days to fill his cabinet, which includes selecting the person to fill Ray Kelly’s shoes as head of the police department.

Bill Bratton, who held the job for two years during the Giuliani administration, has seen de Blasio float his name as a possible candidate, but giving up his lucrative private life may not be something the 66-year-old former police chief is willing to take.

Bratton is the chief executive officer of two companies, Bratton Technologies, Inc., which sells a global law enforcement network called BlueLine, and The Bratton Group, a consulting company through which he arranges speaking engagements.

In addition to his own companies, Bratton was hired in June of this year by NBC and MSNBC as a paid analyst to discuss police policy, primarily based on his decades of expertise in two of the country’s biggest police forces.

Bratton also sits on the boards of several organizations, including the Homeland Security Advisory Council and Crest Advisory.

If Bratton were to take the job of NYPD police commissioner, he would have to step away from all these roles, both paid and unpaid, and back into the life of long hours, press conferences, and late-night phone calls.

“But at the same time there is something to say about life in the public sector,” Bratton said before giving an address on pedestrian safety at NYU. “Every day you get up and make a difference, in the case of New York—eight million lives.”

Bratton added, “The only challenge there would be to give up an awful lot of money to do it.”

At several points during the exchange with reporters, Bratton jokingly referred to how lucrative his speaking engagements have been, although never giving a specific amount. Just like his other roles, if selected as police commissioner, Bratton would be barred from any paid speeches.

Even knowing he could lose out on the riches of the public life if he takes the job, it appeared Bratton is willing to consider the position.

“That [stepping away from private commitments] has all been done by public officials since time began.” Bratton said, “It is really a personal decision for someone like myself and my wife to make as to whether we are at stage in my life where we are willing to give that up to go back into public service.”

Bratton said he has not had any conversations about taking the job with Mayor-elect de Blasio since his victory on Nov. 5.

“I have not been asked yet. I am not applying for the job,” Bratton said. “If asked I will certainly consider it, but I am not submitting an application, if you will.”

Bratton added, “I am not campaigning for the job. Life is pretty good at the job I have at the moment.”

The de Blasio campaign would not confirm if meetings had or had not taken place between de Blasio and Bratton and would not comment if de Blasio had any conversations with any other candidates.