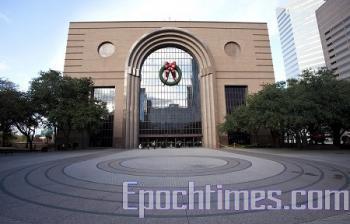 When Shen Yun performed in Little Rock, Arkansas, in January, the show’s venue, the Robinson Center Music Hall, received a letter from the Chinese Consulate in Houston demanding that management cancel the show; otherwise it would “undermine China-U.S. relationship.”

The letter was from the consulate, but unsigned. The theater’s management ignored the letter, and the show proceeded without incident.

At a Houston City Council meeting on June 29, Mrs. Guo, a representative of New Tang Dynasty TV (NTDTV) in Houston, a co-presenter of the Shen Yun show, shared the letter with the mayor and council members.

A Pattern of Harassment

Mrs. Guo informed the council that the letter represented one of many instances of Chinese Consulates’ attempts to interfere with Shen Yun. According to Mrs. Guo, the theater in Houston has also been harassed.

Mr. Song, of the South-U.S. Falun Dafa Association, Shen Yun’s co-presenter in Houston, reported that a Wortham Center official who wished to remain anonymous said the Center had also received pressure. The source said that the theater knew what the Chinese regime was trying to do and how management should handle it.

Mr. Song added that in the three years Shen Yun has performed in Houston—at Jones Hall and the Wortham Center, two of the city’s best venues—the Falun Dafa Association has had a smooth relationship with both the theaters and city government.

In 2009 and 2010, the city of Houston declared “Shen Yun Day” in Houston in recognition of Shen Yun’s performances there while on its world tours.

Kim Nix, a local celebrity, said she saw Shen Yun’s promotional video at a ticket outlet and was fascinated by the beautiful dancing. She called the CCP interference “vulgar” and said she doubted local residents would be affected.

Sandra Hines, local Ambassador for World Peace and member of the Asian Culture Association, told the council that the arts and culture brought by Shen Yun would benefit the city. She added that this is “the land of the free and the home of the brave,” not China.

Mrs. Guo explained the background of the CCP’s attempt to sabotage Shen Yun. Shen Yun Performing Arts is known as the world’s premier classical Chinese dance company. Its goal is to revive China’s ancient artistic traditions, which the CCP has attempted to destroy since the Cultural Revolution.

Alongside the traditional program depicting ancient legends and tales, Shen Yun includes contemporary dance pieces set in today’s China and depicting the CCP’s persecution of Falun Gong practitioners—stories of courage and virtue in the face of evil.

Shen Yun tours to cities around the world, and almost everywhere, the CCP puts pressure on theater managers and government officials to cancel the show.

Mrs. Guo recommended that Houston City Council officials see the show for themselves. She said that after seeing the show, they would understand why the Chinese regime is so afraid of Shen Yun and why Shen Yun earns such high praise from audiences around the world.

After the presentation, many council members expressed dismay at the unsigned letter. Houston Mayor Annise Parker expressed her support. With a smile, she told Mrs. Guo, “I have seen the show, and it’s beautiful. Thank you.”

NTDTV has submitted the letter to the FBI. Ms. Tang, of NTDTV, said she also briefed the FBI about similar incidents in other parts of the world. FBI officials said they would investigate the case.

Mr. Song said that Shen Yun’s world-class artistic performances, compassionate and pure themes, and classical Chinese culture have won the hearts of audiences worldwide. “Shen Yun’s popularity will not be affected by the CCP,” he said.

“The CCP can slander [and] threaten. Other than exposing itself through these evil and treacherous methods, it only helps promote Shen Yun even more,” Mr. Song said. He added that ticket sales for the upcoming performances are strong.

Information about the show is available at www.houshow.com and www.shenyunperformingarts.org