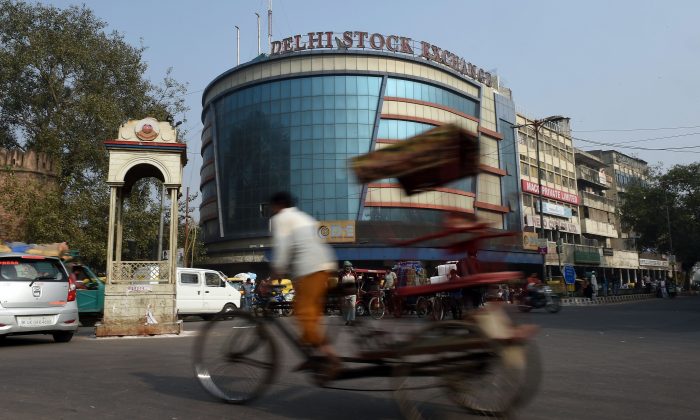 The best-performing stock market in Asia for much of this year has lost that title in less than a month.

As the S&P BSE Sensex Index sank into a correction Oct. 5, posting its biggest weekly plunge in more than two years, investors began paying up to hedge against more declines. The cost of bearish NSE Nifty 50 Index options jumped to its highest level since August of last year relative to the price of bullish contracts, data compiled by Bloomberg show.

The benchmark Sensex swung between gains and losses on Oct. 8. Volatility in Indian stocks, which started spiking at the end of August, hit its highest level since February 2016 as traders digested a long list of reasons to sell:

“The way things have panned out on both domestic and global front, we do not see any chance of overnight reversal,” said Jayant Manglik, president of Religare Broking Ltd. While the possibility of a technical bounce can’t be ruled out, “sentiment is bearish and traders should continue with ‘sell on rise’ approach while maintaining caution in stock selection,” he said.

India’s stock market held the Asian crown up until August when the reasons listed above created the perfect storm. Nifty 50 options volume on Oct. 5, when the index sank the most in almost two years, jumped to 3.25 million contracts, compared with an average of 2.56 million in the previous 20 days.

Even persistent buying by local equity mutual funds—which has time and again provided a buffer against foreign outflows—has slowed. “What may slow down are investments from new investors that are booking losses for the first time,” said Chakri Lokapriya, managing director at TCG Asset Management.

For Sunil Sharma, chief investment officer of Sanctum Wealth Management, the upcoming earnings season will be a good indicator of where India’s stock market is headed. “We will await company earnings and future guidance from companies to better assess the situation,” he said.

In the last reporting season that ended in the June quarter, about three-fourths of Nifty 50 members posted results that either beat or met profit estimates, the highest proportion in at least three quarters, according to calculations by Bloomberg Quint. Tata Consultancy Services Ltd. kicks off the earnings season this week.

Others are cautiously buying quality stocks as valuations have dropped.

“We’re looking at this period over the next six months as a good time to increase your position in India on weakness,” said Tom Masi, a fund manager for Trilogy Global Advisors, who added Indian stocks to his exposure last week while steadily increasing his position throughout the year. “You’re going to be well rewarded probably on a 12- to 24-month time frame from getting positioned, but certainly on a three- to five-year perspective,” he added.

The Sensex trades at 16.6 times profits estimated in the next year, the lowest since February 2017. At its peak, its valuation was the highest in at least a decade.

“We will advise clients to stick to quality names which are available right now at a reasonable price,” said Naveen Kulkarni, head of research at Reliance Securities Ltd.

Morgan Harting, a senior portfolio manager at AllianceBernstein in New York, said he has some exposure to India and the dip hasn’t altered his long-term view.

“When markets move sharply up or down, I generally see those as rebalancing opportunities,” Harting said. “Because our longer-term view on India really hasn’t meaningfully changed, I could see rebalancing into Indian names, but we have to be careful about timing that.”

Still, most are staying on the sidelines for now.

“We’ve been underweight India all year, so clearly that hurt us up until recently,” said Rob Young, a money manager at Icon Advisers. “We need to see a more positive earnings picture or credit markets. We are tactically managing cash in the fund as we generally see EM at fair value.”