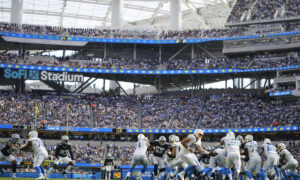 There have been a number of blowouts in Super Bowl history.

Seattle’s 43–8 drubbing of the Broncos in Super Bowl XLVIII was one of the worst ever. But where does it rank in the top ten of all-time?

Here are the 10 most-lopsided Super Bowls in terms of how soon the game was over and how bad the overall discrepancy was:

9. Super Bowl XI; Oakland Raiders 32, Minnesota Vikings 14, MVP: Fred Biletnikoff (4 catches, 79 yards receiving)—Minnesota went to four Super Bowls in eight seasons and lost them all. Though the Bills of the 90′s would eventually surpass them in the heartbreak department, this would be the Vikings last and most disheartening defeat of them all. Minnesota didn’t score the entire first half and just before Vikings backup quarterback Bob Lee connected for a touchdown pass it was 32–7. Oakland running back Clarence Davis ran wild on Minnesota’s defense to the tune of 137 yards on just 16 carries.

8. Super Bowl XIX; San Francisco 49ers 38, Miami Dolphins 16, MVP: Joe Montana (24/35 passing, 331 yards, 3 TDs, 59 yards rushing, 1 rushing TD)—Montana’s performance earned him the second of three Super Bowl MVP awards, but his team’s defense was nearly as good. The Niners held Miami’s Dan Marino, who threw for an NFL-record 5,084 yards that season, to a season-worst 66.9 quarterback rating as he completed a very average 58% of his passes and was picked off twice. Meanwhile, Montana and the offense put up 21 second-quarter points to take a 28–16 lead into halftime and scored 10 more in the third to put the game on ice.

7. Super Bowl XVIII; Los Angeles Raiders 38, Washington Redskins 9, MVP: Marcus Allen (20 carries, 191 yards rushing, 2 TDs)—The only Super Bowl Washington coach Joe Gibbs ever lost was this one and his team was never really in it. The defending champion Redskins were already down 21–3 at the half, thanks to a pair of defensive scores, when Raiders running back Marcus Allen took over. The future Hall-of-Famer scored a pair of rushing touchdowns in the third quarter—including a 74-yarder—to put the game well out of reach.

6. Super Bowl XLVIII; Seattle Seahawks 43, Denver Broncos 8, MVP: Malcolm Smith (interception return for TD and a fumble recovery)—The Broncos and newly minted MVP Peyton Manning fell behind on the very first play from scrimmage (a botched snap out of the shotgun that ended up in the end zone) and never got on track. By halftime the Seattle lead over the league’s highest-scoring offense was 22–0. The Seahawks then opened the second half with a kickoff return for a touchdown and the game was unofficially over. The Broncos, which committed four turnovers to Seattle’s zero, finally got on the board by the end of the third quarter with a touchdown that cut the now-insurmountable lead to 36–8.

5. Super Bowl XXIX; San Francisco 49ers 49, San Diego Chargers 26, MVP: Steve Young (24/36 passing, 325 yards, 6 TDs, 49 rushing yards)—Steve Young officially escaped Joe Montana’s shadow in this one, breaking Montana’s Super Bowl-record of five touchdown passes with his six. Young and the Niners came out swinging in the opening quarter with touchdown passes of 51 yards and 44 yards to go ahead 14–0. By the third quarter Young had already connected for his fifth TD pass (he would still add another) to make it 42–10, and knock out any hope the Chargers had of hoisting the Lomardi Trophy.

4. Super Bowl XXII; Washington Redskins 42, Denver Broncos 10, MVP: Doug Williams (18/29 passing, 340 yards, 4 TDs)—Before John Elway ended his career with back-to-back Super Bowl wins he went through back-to-back defeats and three losses in four years in the big game. This was the second of the three and it actually started out well for Denver as they held a 10–0 lead after one quarter. But Washington struck back with five second-quarter touchdowns, including four Doug Williams touchdown throws to take a commanding 35–10 lead at halftime and effectively end the game. Elway finished the game a paltry 14/38 passing with 3 interceptions and quarterback rating of 36.8 against Washington’s defense.

3. Super Bowl XXVII; Dallas Cowboys 52, Buffalo Bills 17, MVP: Troy Aikman (22/30 passing, 273 yards, 4 TDs)—Buffalo’s third of four straight Super Bowl losses was an ugly one. The Bills committed a Super Bowl-record nine turnovers (four interceptions and five lost fumbles), lost starting quarterback Jim Kelly to an injury in the second quarter, and were a Leon Lett-fumble away (just before crossing the goal line) from allowing a record number of points. On the other side, the MVP could very well have gone to either Aikman, Emmitt Smith (108 rushing yards, 1 TD), or Michael Irvin (six catches for 114 receiving yards, 2 TDs) as Dallas’ offense was took full advantage of the Bills’ mistakes.

2. Super Bowl XX; Chicago Bears 46, New England Patriots 10, MVP: Richard Dent (1.5 sacks, 2 forced fumbles, and a blocked pass)—The Bears vaunted defense during the ‘80s netted them only one NFC Championship, but they certainly took advantage of it. Chicago stifled New England’s offense to the tune of a Super Bowl-record low seven total rushing yards—partly due to their seven sacks, which was also a record. In fact the only reason this isn’t number one on this list is the meaningless fourth-quarter touchdown by New England when the game was already decided (down 44–3 at the time) to get their score to double-digits.

1. Super Bowl XXIV; San Francisco 49ers 55, Denver Broncos 10, MVP: Joe Montana (22/29 passing, 297 yards, 5 TDs)—Joe Montana’s final Super Bowl performance might have been his best as Joe Cool directed San Francisco’s offense to a record number of points while Montana himself threw for a then-record five scores. Meanwhile, the 49ers’ defense made Elway look silly, limiting him to a final line of 10/26 passing for 108 yards and a pair of interceptions. By the third quarter, the only suspense left was whether Montana or Rice (148 yards receiving and 3 touchdowns) would be the game’s MVP.