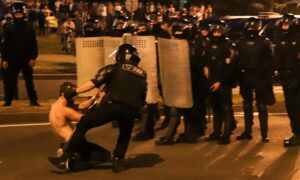 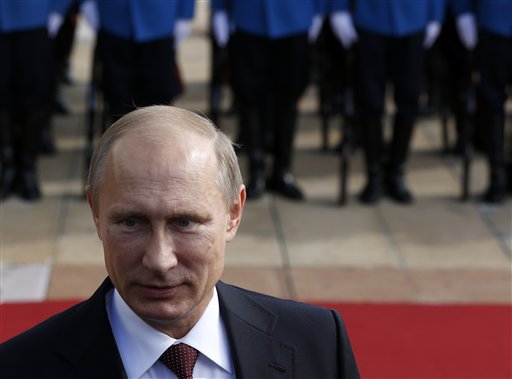 Russian President Vladimir Putin reviews a guard of honor during a welcoming ceremony in Belgrade, Serbia, Thursday, Oct. 16, 2014. Putin arrived on a one-day official visit to Serbia during which he will attend a military parade commemorating the 70th anniversary of Belgrades liberation from Nazi occupation. (AP Photo/Darko Vojinovic)
Europe

Russian president Vladimir Putin has threatened the United States and other Western powers over the ongoing conflict in Ukraine, saying that his country won’t be “blackmailed” by increasing sanctions.

Fighting between Ukraine and pro-Russian forces has left the country deeply divided and war-torn, and has put Russia and many other countries at odds.

Russia has denied sending troops or material support to pro-Russian rebels but the U.S. and Europe has implemented sanctions on top Russian officials anyway, believing that Putin may be lying.

Putin said in comments to Serbian newspaper Politika that the sanctions are unacceptable and that they won’t force him to do anything.

“We hope that our partners will realize the recklessness of attempts to blackmail Russia, will remember the risks that a spat between major nuclear powers incurs for strategic stability,” he said.

For our part, we are ready to develop constructive cooperation on the principles of equality and real consideration of mutual interests.”

Putin made similar comments in August, telling a group of Russian youth that foreign powers should take care not to “mess with us,” adding: “Thank God, I think no one is thinking of unleashing a large-scale conflict with Russia. I want to remind you that Russia is one of the leading nuclear powers.”

He also said this week that the West is ultimately behind the conflict in Ukraine, including the removal of the pro-Russian president in February, and that the takeover of Crimea was legitimate because most of its citizens voted to join Russia.

“Attempts to pressure Russia by means of one-sided, illegitimate restrictive measures are not bringing us towards a resolution, and are complicating dialogue,” Putin added.

“How can one talk about striving for de-escalation in Ukraine if new sets of sanctions are being introduced almost at the same time as agreements to promote the peace process are reached?”

The comments came as U.S. president Barack Obama and Ukrainian president Petro Poroshenko discussed ways to effectively monitor and control the uneasy border between Russia and eastern Ukraine by phone.

The White House says they discussed how all sides must live up to a cease-fire deal signed last month in Minsk. The deal has helped reduce hostilities but failed to completely halt fighting.

And Putin, visiting Serbia, encouraged the country to not impose sanctions as some European countries have.

“We have been united by many things in the past, and I hope we face good common future,” Putin told Serbia’s pro-Russian president, Tomislav Nikolic.

Nikolic responded: “Serbia sees Russia as its big ally and partner, and we will always be on the same side.”

The country’s Western-leaning prime minister, Aleksandar Vucic, tried to reassure the EU, however, that Serbia is not changing its proclaimed course.

“Serbia is on its European Union path and it will not sway from that road,” he said after his meeting with Putin.

Although Serbian officials say they respect Ukraine’s territorial integrity and do not support Russia’sannexation of Crimea, they have refused to impose sanctions against Russia like the EU and the U.S. They say that would be disastrous for their country’s stagnating economy — especially since most of its energy sector is controlled by Gazprom, the Russian energy giant.

Instead — and despite warnings from the EU — Serbia is hoping to capitalize on Russia’s ban on Western goods by signing deals with Putin that would increase food exports to Russia.

During his talks with Vucic, Putin urged Serbia to profit from Moscow’s sanctions against the West.

“It’s a very good moment for Serbia to take a niche in the Russian market,” he said, adding that Russian businessmen could offer loans to Serbian food producers so they could boost exports to Russia.

He said Moscow could offer Serbia a guarantee for exporting a certain number of cars to Russia from Serbia’s FIAT factory.

Putin will meet with Poroshenko and key European leaders on Friday on the sidelines of the 10th ASEM summit in Milan.

German Chancellor Angela Merkel was expected to meet with Putin alone on Thursday.