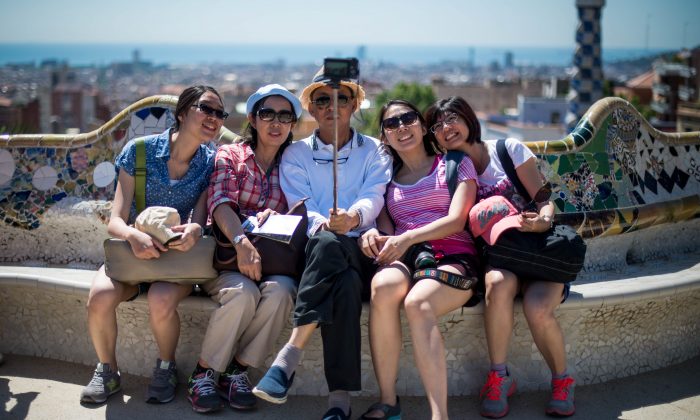 BARCELONA, SPAIN - JULY 11: Tourists visit Gaudi's Park Guell on July 11, 2014 in Barcelona, Spain. As traders of 'La Boqueria' complain about tour groups getting in the way of their real customers, Barcelona's authorities are debating how to control the number of tourists in the city as an estimated 10 million people are due to visit this year. (Photo by David Ramos/Getty Images)
International

BUENOS AIRES, Argentina—Trade doesn’t just consist of shipping containers from China to the United States. There is trade in services, too, and tourism is an important part of it. According to a report by the World Economic Forum (WEF), growth in global tourism continues unabated, despite rising nationalism.

“In a world where we hear more talk about walls and borders, we see the opposite in tourism,” said Peter Vanham, a spokesperson for the WEF, at the presentation of the Travel & Tourism Competitiveness Report 2017 in Buenos Aires, Argentina, on April 6.

Total international tourist arrivals increased by 46 million to 1.2 billion in 2016. When citizens of one nation leave their country to stay in hotels and visit restaurants in another, this is counted as an import in services. Not even Brexiters or the Trump administration would want to prevent their citizens from enjoying a nice vacation.

Who gets the largest piece of the tourist pie depends on how well the country caters to the tastes of visitors. For this, the WEF report has different metrics, such as infrastructure, ease of travel, cultural and natural sights, digital connectivity, and price.

Because of their rich cultural and natural resources, European nations dominate the top 10 with six entries, including the top three of Spain, France, and Germany.

The United States dropped two places to occupy the sixth slot, but makes the most money, with $488 billion generated from tourism in 2016. Expenditure per person is also relatively high—at $2,638 compared to Germany’s $1,054, for instance.

“In Europe, a lot of international travel is intra-Europe. Short trips, cheaper travel, your friends can host you. The United States has a significant share of longer business travel,” Roberto Crotti, one of the authors of the reports, told The Epoch Times.

The price level, visa requirements, and a small government marketing budget makes the United States less competitive than the top three. Nonetheless, its size and diversity are advantages, says Crotti.

“There is a lot to offer, a good combination between natural parts, beach resorts, sports, events, concerts. So big countries have this advantage—they can offer a bigger portfolio of tourism activities. If you want to have different experiences, you can go to the United States [and] go from the beaches in Florida to skiing in Colorado.”

The United States also ranks relatively high in connectivity, which is becoming increasingly important for tourism. Tourists, who are using their mobile phones more and more to book travel arrangements, expect a seamless experience between booking and traveling. They thus demand stable, fast, and ubiquitous Wi-Fi and mobile networks.

In addition, the internet is a powerful promotional tool. “If you think about how many people post pictures from their vacations on social media, then you see the advertising effect. The potential to create awareness about specific destinations is amazing,” said Crotti.

Similar to real trade, the United States and Europe are facing stiff competition from China, which jumped two places to 15th place this year. Crotti says China is more active in getting its natural and cultural sites promoted through international organizations like UNESCO.

“China did a good job listing its sites on the cultural heritage list. If it’s protected by UNESCO, you are interested in going to see it,” Crotti said.

So even though China has a lot of work to do in terms of environmental sustainability as well as infrastructure, there is no time for complacency on the part of Europe and the United States. More proactive and positive government involvement would not hurt, especially in the United States, says Crotti. “The number of sights you have doesn’t matter, you have to show the world what you have.”