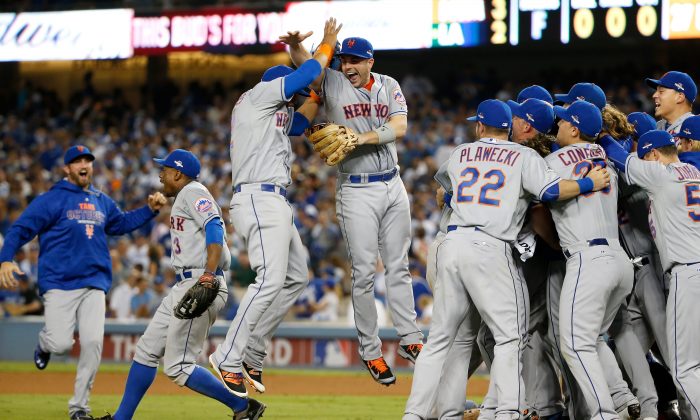 The Mets have won five straight postseason games and were never behind in the four-game NLCS sweep of the Cubs. (Sean M. Haffey/Getty Images)
Baseball

The Mets and Royals—two teams that haven’t brought home the World Series trophy since the mid-1980s—are set to face off in this year’s Fall Classic, and anyone who says they predicted this matchup before the season began should be checked for Pinocchio-itis (elongation of the nose).

While most figured the long-suffering Royals’ 2014 run to the World Series was a one-hit wonder, the Mets weren’t even in the discussion of teams considered good enough to have a fluke run to the series. But here both teams are, and the matchup is a good one—the Mets’ starting rotation and improved hitting, against the Royals’ aggressive offense and stellar defense. Here’s how the teams match up:

The Royals are not a patient hitting team. They’re up there hacking. Kansas City walked the second-fewest times (383) of any team this season, yet they struck out only 973 times, far fewer than anyone else (second-best was Atlanta at 1,107). Unorthodox leadoff hitter Alcides Escobar—who has not walked yet this postseason—exemplifies this more than anyone. In Game 5 of the ALDS against Houston, the MVP of the ALCS saw just seven pitches in four at-bats.

The Royals have a deep lineup—so deep that Alex Gordon and Alex Rios are the team’s 8-9 hitters—and the team is aggressive on the basepaths. Lorenzo Cain’s winning score from first base—on a single in the 8th inning of Game 6—was the second time he did that this postseason. In addition, the team has a designated base stealer in Jarrod Dyson ready to come off the bench at any time.

For the Mets, all the talk and attention is on Daniel Murphy—and rightly so. The clutch infielder is the first player ever to homer in six straight postseason games. Once a major weakness of the team, New York upgraded their hitting when they acquired Yoenis Céspedes, Kelly Johnson, and Juan Uribe and promoted top prospect Michael Conforto in late July.

Questions remain for New York, though, such as the health of Céspedes’s ailing shoulder and whether Murphy can stay hot. Slight advantage: Kansas City.

The Royals’ starting pitching has been their biggest weakness all season, and it really hasn’t improved in the postseason. They have no idea what to expect from Johnny Cueto (7.88 ERA) or the talented Yordano Ventura (5.09). As a team, their starters’ ERA in the postseason is a dreadful 5.56.

For the Mets, this is their calling card. Jacob deGrom, Matt Harvey, Noah Syndergaard, and Steven Matz form the most dominant four-man rotation in the game. While the starters’ ERA in the regular season was a stellar 3.44 (fourth best), they’ve been even better in the playoffs, sporting a 2.65 ERA while averaging 6.0 innings per start—a full inning more than Kansas City’s 5.0. Big advantage: New York.

The Royals were the No. 1 team on defense according to Fangraphs.com, while the Mets were somewhere in the middle of the field at 17th. Salvador Pérez (two Gold Gloves) blocks nearly everything behind the plate, First baseman Eric Hosmer (two) made a spectacular behind-the-back catch in right field against Toronto, and Alex Gordon (four) has been the best left fielder in the game for the past five years. The Mets aren’t horrible on defense, but they don’t boast three multi-winning Gold Glove fielders. Advantage: Kansas City.

Last year, no team could touch the Royals’ late-inning combination of Kelvin Herrera, Wade Davis, and Greg Holland—all had ERAs under 1.50 and were equally as tough in the postseason. With Holland out, Ryan Madson seamlessly stepped in and was great—in the regular season, anyway—sporting a 2.13 ERA. He’s struggled in the playoffs, though, allowing Toronto to tie Game 6 in the 8th inning of the ALCS and imploding against Houston in the 7th of Game 4 in the ALDS. Fortunately for the Royals, Davis and Herrera have held the line with a combined ERA of 0.59.

The Mets have the underrated Jeurys Familia (43 saves, 1.85 ERA) as well as Tyler Clippard in the setup role, and they’ve gone opposite ways this fall. Clippard struggled in the NLDS and NLCS (combined 5.79 ERA) but Familia has been lights out, allowing just two hits and no runs in 9 2/3 innings. Slight advantage: Kansas City.

The Mets are hot, they’re playing with house money, and they’re well-rested. They don’t have home field advantage, but with Kansas City’s Kauffman Stadium being a pitcher’s park, it may not matter as much. On the flip side, the Royals will be hampered in New York without DH Kendrys Morales in the middle of their lineup. Slight advantage: New York.

While the Royals have the advantage on defense, their bullpen advantage is reduced by the fact that the Mets have consistently gotten more innings out of their starters. Besides, Familia has been just as unhittable as Davis. The Royals have a good offense, but they struggled against the best starters they saw this postseason—Dallas Keuchel and David Price. The Mets have several comparable starters to those two, and if Murphy stays hot, there’s no reason to believe they’ll slow down. Prediction: New York in six.