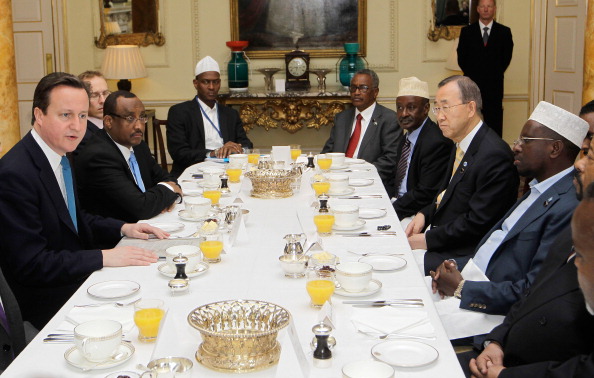 With more than two decades without a central government, conflict-ridden Somalia will get assistance from world powers in helping deal with piracy, militant groups, and famine, but world leaders say the country needs to install a permanent government.

British Prime Minister David Cameron hosted a meeting in London of around 50 delegates from different countries and organizations, saying that he hoped the conference would represent a “turning point in helping the Somali people to reclaim their country,” according to a transcript of a speech delivered on Thursday. The conference was also attended by U.S. Secretary of State Hillary Clinton, United Nations Secretary-General Ban Ki-Moon, and the president of Somalia’s transitional government.

Cameron stressed that if measures are not taken, the world is at risk of more terrorist threats and regional piracy. “These problems in Somalia don’t just affect Somalia. They affect us all. In a country where there is no hope, chaos, violence and terrorism thrive. Pirates are disrupting vital trade routes and kidnapping tourists,” he said.

In the past decade, Somalia has had a transitional administration that is restricted to the capital, Mogadishu, but has not had a central government since 1991, when longtime Marxist dictator Mohamed Siad Barre was overthrown. Since then, warlords, tribes, and most recently, Islamist al-Qaeda-affiliated al-Shabab have carved up portions of the country, calling it theirs.

Secretary Clinton said that first, the financial lifelines to al-Shabab due to their connections with al-Qaeda need to be cut. The two groups announced their alliance several weeks ago. “We must keep the pressure on al-Shabaab so that its grip on Somalia continues to weaken,” Clinton said, according to a transcript.

Clinton promised more funding and training for African Union forces in Somalia to deal with the militant group and ruled out holding talks with the group because of its decision to join forces with al-Qaeda, as “it is not on the side of Somalis but on the side of chaos, destruction, and suffering.”

Amnesty International said on Thursday that the one-day London conference failed to adequately address the human rights situation in Somalia.

“The recent surge in military operations increases civilians’ vulnerability to attacks and displacement, and brings more arms into a country already awash with weapons,” said Benedicte Goderiaux, a senior Somalia researcher for Amnesty.

As a result, the increase in militarization in the country “could fuel further human rights abuses. At this conference we hoped to see more efforts to improve the safety of the Somali population,” she added.

The London-based rights group said that international military action should not further damage the already dire situation in the country.