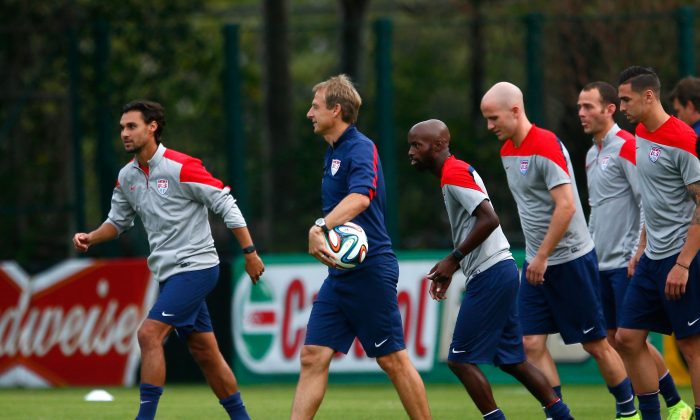 A man ran across the field during the World Cup match between the US and Belgium.

The man, who was wearing a blue shirt, ran across the field during the 16th minute of play.

Security then grabbed the man and ushered him off.

It only lasted about a minute.

He didn’t mind the searing sun, the 90-plus degree temperatures or the lack of a breeze in Austin. He was here for a party with thousands of other American soccer fans set to watch the U.S. play Belgium in theWorld Cup, with the winner set to move on the quarterfinals of the biggest sporting event in the world.

“And I’m not even a soccer fan. I’m a tennis guy. I should be watching Wimbledon,” Watson said. “But I wanted to get out and be part of the community, to come together and cheer for the same team.”

From Texas to Chicago to California, U.S. fans flocked to public spaces, from wide open parks to sports stadiums to their favorite sports bars, to watch the game.

Tuesday’s game was the fourth for the U.S. in Brazil as it tried to move deeper into the tournament. With every game, the crowds have swelled as die-hard soccer fans joined the newcomers. Suddenly, America looks like a soccer-crazed country, as people skip work and gather in big crowds and watch the game play out on giant screens.

The U.S.-Portugal game drew 24.7 million viewers overall, and the 18.22 million who watched on ESPN were the most the network has ever attracted for an event not involving American football. The Germany game averaged 10.7 million viewers, making it the third-most watched World Cup game ever on the network.

So all that excitement built up for Tuesday’s game as fans hoped for the best. In Chicago, home of the U.S. Soccer federation, officials moved a game watch event from a public park to Soldier Field to accommodate a larger crowd. The city expects up to 20,000 at the stadium which can hold up to 61,500.

Heat was a concern at some venues. In Washington D.C.’s Freedom Plaza, the city set up misting stations to keep fans cool. That wasn’t a problem at AT&T Stadium in Arlington, Texas. The home of the Dallas Cowboys has air conditioning.

In Austin, the city set up a watch party at outdoor park near downtown and more than 1,000 set up lawn chairs and blankets to watch the game on giant screens. Volunteers passed out sunscreen. Despite the heat, some fans showed up hours early to stake out a shady spot or one with the best view of the screens. Volunteers passed out sunscreen to some

Most wore red, white and blue, and many brought American flags, making it look like and early Fourth of July party.

Caitlyn Baldasaro, a 21-year-old college student, said she’s seen video images of giant World Cup watch parties in places like Paris, Mexico City and Rio de Janeiro and predicted they will only get bigger in the U.S. as the Americans progress farther in the tournament.

She noticed the mix of soccer experts and novices that have been in the crowds so far. She considers herself an expert.

Not Joe Ochs, who arrived at a popular soccer pub in Denver, Colorado at 7 a.m. to claim a seat.

“Just picked (it) up during World Cup,” said Ochs, 37, a sales and marketing rep for gyms and fitness clubs.

For Ochs, soccer’s rules are a mystery.

But Ochs said that doesn’t make it any less fun.

“I get into it with my countrymen and watch Team USA … when the cheer goes up, I’m with them,” Ochs said.