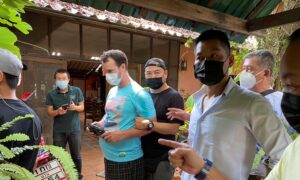 Worksite Arrests of Illegal Aliens Up 354 Percent From 2017

Immigration authorities arrested over three times more illegal aliens as part of worksite enforcement in just eight months of this fiscal year compared to the entirety of fiscal 2017, according to the latest data from Immigration and Customs Enforcement (ICE).

Immigration enforcement agents arrested a total of 610 illegal aliens from the beginning of the fiscal year on Oct. 1, 2017, to May 4, 2018, an increase of more than 350 percent compared to the prior fiscal year.

ICE also more than quadrupled the number of arrests of employers who knowingly hire illegal aliens. The Homeland Security Investigations (HSI) unit arrested 594 employers so far this fiscal year, compared to 139 criminal arrests in all of last year.

“Our worksite enforcement strategy continues to focus on the criminal prosecution of employers who knowingly break the law, and the use of I-9 audits and civil fines to encourage compliance with the law,” acting executive associate director for HSI Derek Benner said in a statement.

President Donald Trump promised to combat illegal immigration during his campaign. Since the inauguration, he has mounted a multipronged effort, the centerpiece of which is building a wall on the U.S. border with Mexico.

Federal law requires employers to verify the identity of all employees and their eligibility to work in the United States.

ICE audits businesses by sending a notice of inspection to employers, who then have three days to produce the relevant employment eligibility verification forms. ICE then conducts a compliance inspection, which can lead to civil fines and criminal prosecution for employers who break the law. Employees who are found to be in the country illegally are then arrested for deportation.

Last year, businesses paid more than $100 million in judicial forfeitures, fines, and restitution as a result of the worksite investigations. The bulk of that sum came from Asplundh Tree Experts, which paid the government $95 million after a six-year HSI investigation found that the company had knowingly hired and re-hired illegal aliens.

“Worksite enforcement protects jobs for U.S. citizens and others who are lawfully employed, eliminates unfair competitive advantages for companies that hire an illegal workforce, and strengthen public safety and national security.”

Recommended Video: The National Guard Has Started Deploying Troops to the US–Mexico Border