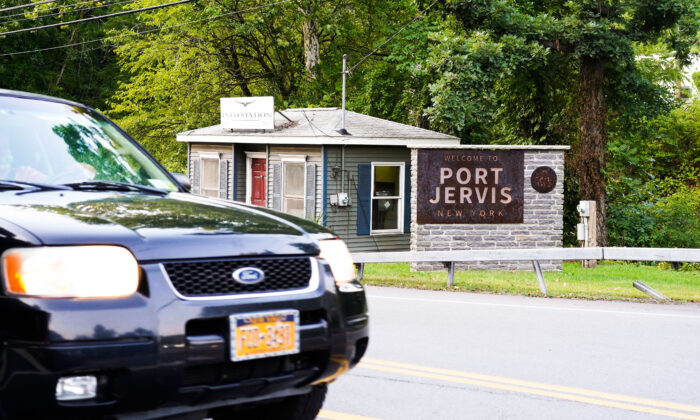 A sign that welcomes people to the city of Port Jervis sits off an exit from Interstate Highway 84 in Orange County, N.Y., on Sept. 9, 2022. (Cara Ding/The Epoch Times)
Orange County NY

An average worker cannot afford market-rate apartments in Orange County, New York, in 2022, according to a newly released report by Hudson Valley Pattern for Progress.

To afford a one-bedroom apartment in the county, which has a fair market rate of $1,107, a renter must have a regular 40-hour-a-week job that pays over $20 an hour.

However, an average worker earns just under $15 an hour in the county.

A household with two average workers can barely afford a two-bedroom apartment in the county, which has a fair market value of $1,412.

Fair market rent and worker wage data are based on reports by the Department of Housing and Urban Development and the Bureau of Labor Statistics, respectively, according to the report.

The report calculates affordability by an industry-wide standard, which says monthly housing costs must stay below 30 percent of one’s wages to be affordable.

However, Orange County living gets affordable when an average worker can work around 60 hours a week—though that’s not an option for everyone, according to the report.

For those average workers who find ways to make ends meet, they still find it hard to start a family, buy a house, or pay back student loans or credit card debts, the report says.

According to the report, the entire Hudson Valley region—which covers nine counties along the Hudson River—is unaffordable for average wage earners. The only exception is Sullivan County, where a single average earner could afford a one-bedroom apartment at market rate.

Putnam and Rockland are the two least affordable counties in the region for average renters.

Since 2016, Hudson Valley Pattern for Progress has produced an annual report on the affordability of rental housing throughout Hudson Valley.

Hudson Valley Pattern for Progress is a Newburgh-based nonprofit that advocates for regional solutions to improve the quality of life in the Hudson Valley region.