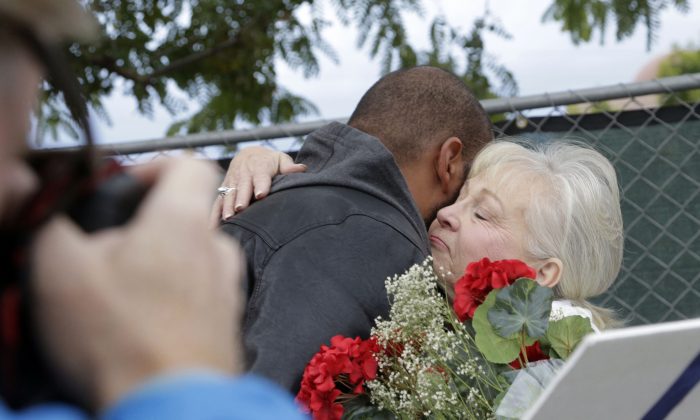 A photographer takes pictures of unidentified staff members as they hug before returning to work at the Inland Regional Center in San Bernardino, Calif., on Jan. 4, 2016, where an attack killed 14 people on the center’s campus on Dec. 2. (AP Photo/Nick Ut)
US

SAN BERNARDINO, Calif.—Behind a chain-link fence and under heavy security, workers on Monday returned to their offices at the San Bernardino campus where 14 people died last month in a massacre.

Inland Regional Center employees flashed their identification badges to security guards who ushered them into a parking lot surrounded by a mesh-wrapped fence as dozens of news reporters stood outside.

Since the attack, few employees of the center that serves autistic children and mentally disabled adults have gone to the office, other than for brief visits to gather personal belongings.

Melvin Anderson, who helps transport the center’s clients, was trying to figure out where he could turn in paperwork to get paid. The last time he did that—as he does each month—was the day before the Dec. 2 terror attack at a holiday luncheon for county employees. The gathering was held in a building on the gleaming campus.

“It’s scary, really scary, but we as Americans just have to face what’s going on and try to move on,” Anderson said. “We’ve got to pull ourselves together, and we’ve got to go on.”

Many of the center’s roughly 600 employees have continued to work and visited their clients’ homes over the past month. But they hadn’t been together in the place where everything froze since law enforcement officers whisked them away after the gunfire.

Amid the investigation and cleanup, the campus has been locked behind the temporary fence. Within that perimeter, in one corner, is a second fence. It seals the conference center that San Bernardino County’s health department was renting for the holiday luncheon when the two shooters began their assault.

A county restaurant inspector targeting his co-workers was joined by his wife in killing 14 and injuring dozens in the attack. They were motivated by radical Islamist beliefs, according to the FBI.

The conference building did not reopen Monday, and it’s unclear when it might.

In the afternoon, a memorial service for victims of the shooting was planned for county employees so they can mourn together.

At the center, staff members have missed each other’s friendly faces and hallway chit chat, said Lavinia Johnson, the executive director. They yearn to renew a sense of stability at an institution unmoored by violence.

“Most of us are relieved to be back at work. We want to continue with the normalcy, and we miss each other very much,” she told reporters. “We want to ensure that our staff feels safe and secure as they work in their offices.”

A welcome and food were planned for returning employees. Professional counselors were being made available for workers who wanted them.

“It may take a day or two for most people,” said Kevin Urtz, the center’s associate director. “There’s no blueprint for this kind of thing, and everybody is going to react to it differently.”

Both Johnson and Urtz have worked for more than 25 years at the center, which with nearly 31,000 disabled clients in the working-class sprawl east of Los Angeles is the largest of 21 in California. It is a vital community resource in a place where about one-third of households live below the poverty line.

As the workers drove into the parking lot, 41-year-old client Ron Pollakoff held a sign farther down the road showing his support for a place he said has helped him with housing and other services.

He said he knew one of the victims, and was relieved to learn the worker who handles his case was alright.

“I’m still shocked over all of this,” he said. “I’m just glad that so many came out of this unscathed.”