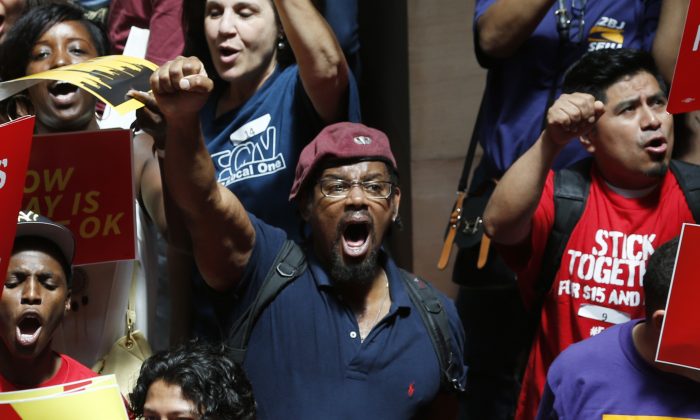 Workers rally for an increase in the minimum wage at the Capitol in Albany, N.Y., on June 17, 2014. Several hundred fast-food workers and other low-wage employees from around New York gathered to pressure lawmakers to raise the minimum wage from $8 to $10.10 an hour and let local cities raise it even higher. (AP Photo/Mike Groll)
New York

NEW YORK—In advance of elections, over a dozen campaigning politicians stood with workers at City Hall Thursday in support of a higher minimum wage, with offers ranging from $10.10, all the way to $30.

Members of workers’ coalitions cheered at their every word and shouted slogans.

Currently, the New York state minimum wage is $8 and is set to increase to $9 by the end of 2015. Gov. Andrew Cuomo, backed by Mayor Bill de Blasio, supports a $10.10 state minimum wage, and the right for New York City to raise its minimum wage even higher. Cuomo is expected to advance the matter next year.

Assemblyman David Weprin elaborated on the same theme: “You can’t make ends meet with 8, 9, 10, or even 11 dollars an hour. We really have to raise people up.”

“Someone with a job shouldn’t be struggling with poverty any longer. It should be 20, 25, 30 dollars,” said Assembly candidate Michael Blake.

Some politicians described the problem as systemic, criticizing free enterprise in the United States.

Assembly candidate Lori Boozer agreed, saying: “This is an issue that this country is built on. This country was never about prosperity, it’s about profit.”

Policy analyst Catherine Ruetschlin, from Demos, a liberal think tank based in Manhattan, observed that in recent years, wages haven’t kept pace with living costs, which may explain the demand for higher minimum wages.

Phasing in wage increases, like what Seattle and other cities plan to do, offers benefits to workers and won’t be as disruptive as the quick changes rally members are demanding, said Ruetschlin.

She noted that the higher minimum wage wouldn’t add up to a lot in a few years. “If the $15 minimum wage were phased in, then, due to inflation, $15 in the future would only be worth $12.50 today.”