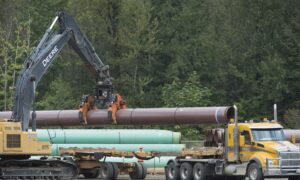 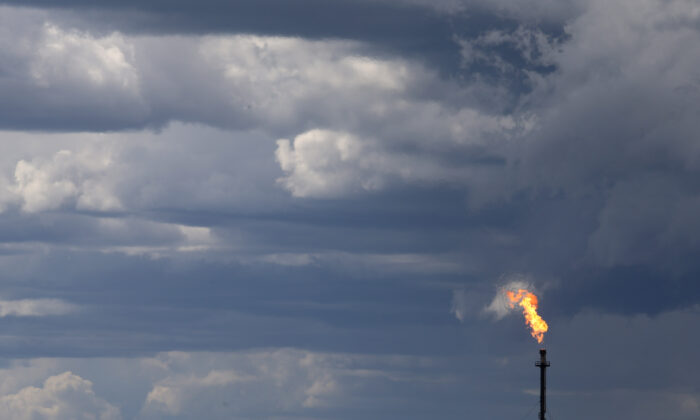 A flare stack at an oilsands facility north of Fort McMurray in a file photo. (Cole Burston/AFP via Getty Images)
Canada

The new year has brought more woes for Alberta’s resource sector already hit with low oil prices and fleeing investments before the U.S. announcement of the Keystone XL pipeline cancellation.

Forty-one-year-old Albertan Ryan Telford, who has worked in the oil and gas sector since he was 17, says that from his experience and knowledge of the industry, he estimates that between 5,000 and 8,000 people in Alberta are directly affected by the cancellation of Keystone XL.

“There’s a lot of work that happens before you can even begin the pipeline. You’ve got to survey and locate anything that’s there, phone lines, water lines, … and then you’ve got surveyors who survey the actual pipeline,” he said.

“And then you’ll have guys that go out and cut the right-of-way, scrape all the topsoil off, and then the actual pipeline crew will start their trenching work. Then the new pipe comes in, they start welding all of that up, and when they’re done, you hardly know there’s a pipeline there.”

The Alberta government had estimated that the project would create 2,000 construction jobs over two years.

Telford’s own experience in the oil and gas business started with a job as a “swamper,” helping to load, move, and unload drill rig equipment from site to site. From there he was hired on as a “roughneck”—one of the most gruelling and dangerous jobs on an oil-drilling platform—and then he went on to work as an oil rig motorman and then to building the platforms.

Today, the Grand Prairie native, who lives in the small hamlet of Woking, works for a local electrical supplier to oil and gas operations selling modern artificial lift rigs—the descendent of the iconic pumpjacks.

Over the past few years, some of the biggest hits to the oilsands include Teck’s cancellation of its $20 billion Frontier project, Texas-based Kinder Morgan Inc. selling off all its assets in Canada, Encana Corp.’s exodus to Denver, and most recently, the Keystone XL cancellation.

“It’s baffling to me, with Canada having as much energy resources as we do here, to even think about bringing oil in from other countries,” he said. He added that he’s bullish about the Trans Mountain pipeline expansion to the West Coast, and about Énergie Saguenay, which will deliver Alberta natural gas to the east coast of Canada.

“If we get a couple more refineries built—those exporting stations—built on our coasts, and we start exporting to Asia, we will be one of the richest countries around,” he says.

“But right now it’s landlocked. And a lot of these carbon taxes and stuff like that are making it uneconomical for producers to look at working [in the oilsands].”

Another recent development in Alberta’s resource sector is the provincial government’s cancellation of new metallurgical coal mining leases it had issued for the Rocky Mountains north of Crowsnest Pass, a move that was taken following a public outcry.

Many raised concerns about the impact the coal mines would have on sensitive areas, with ranchers whose cattle graze on the lands east of the Rocky Mountains launching a legal challenge. Meanwhile, some in the resource sector worry about the impact the lease cancellations will have on their industry.

Chrystal Montieth, a third-generation mechanic in Alberta’s mining industry, laments the direction things are going in.

Montieth, who hails from Blairmore in the municipality of Crowsnest Pass, works the night shift managing a warehouse of heavy equipment parts at Albian Sands Energy Inc.’s oilsands project north of Fort McMurray.

She says it’s frustrating that outsiders seem detached from the resources that are so central to their lives—crude oil and metallurgical coal used in steel production, for example—and from the people who produce those resources and whose livelihoods depend on the work.

“They don’t understand our community is slowly turning into a ghost town,” she said, adding that besides creating jobs for employees, coal companies invest in the community and support activities such as sports.

Due to public pressure, Natural Resources Minister Sonja Savage announced on Feb. 8 that the province would reinstate the 1976 Coal Policy and conduct public consultations on a new coal policy.

The government cancelled 11 recently issued coal leases and paused future coal exploration on what used to be classified as Category 2 lands under the 1976 policy, which include parts of the southern Rocky Mountains and their foothills. It stopped short of nixing proponents like the Riversdale Resources’ Grassy Mountain coal mine project, already before the Alberta energy regulator.

Montieth said the bad news about Keystone XL, cancelled by U.S. President Joe Biden on his first day in office, “upset a lot of folks. The mechanics were pretty upset. A lot of guys I work with were really upset about it. I was upset about it.”

“It’s one of the cleanest ways to transport oil. It’s a lot safer and it’s a lot cheaper to push oil through a brand-new pipeline than it is on rail or truck,” she said.