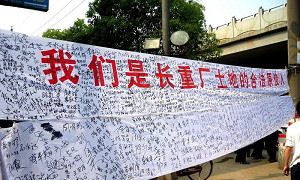 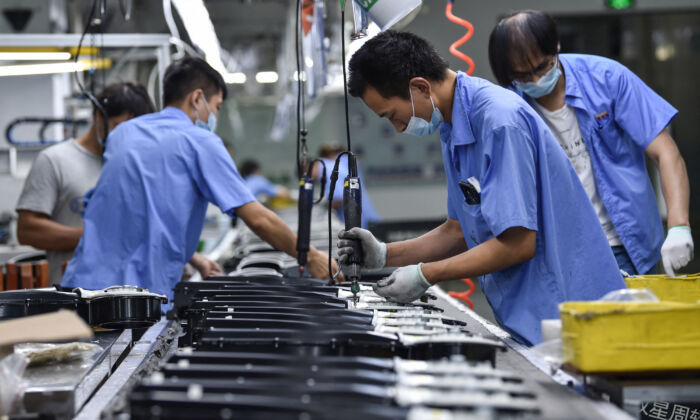 The impact of state-enforced power cuts in parts of China is becoming evident with one example being worker unrest. Worker protests have broken out in a major city in the country’s east coast economic center the Yangtze Delta, due to lower wages and shortened work hours caused by power restrictions put on factories.

In the delta city of Suzhou in Jiangsu Province, workers protested at Wujiang Jingyuan Computer Factory on Oct. 10 and Oct. 11. Nearby roads were blocked and both local police and riot police showed up at the scene.

“Yesterday, the workers went to the factory to protest,” Li Xing (alias), a worker at the factory, told Chinese language Epoch Times on Oct. 11.

“I didn’t go but I heard that there were more than 800 people there. Today I am at the scene and there are more than 1,000 people,” Li said.

“The basic salary in the factory is about 2,000 yuan ($310) a month, and the rest of our salary is provided by the labor service company that hired us,” Li said. “The workers are all on hourly wages. Now I can’t even get to work 160 hours per month.”

According to Li, the labor service company notified the workers that if they do less than 160 hours a month, they will lower their hourly wages.

“Because of the power rationing, the factory has given workers days off; one day work and off the next day,” Li said.

“Today is already Oct.11, and I have only had 40 hours of work for this month so far. If this continues, how can it be possible to have 160 hours of work a month? The labor service company cannot cut our salary because of power cuts!”

On Oct. 11, Li said that thousands of workers gathered at the Wujiang Computer Factory, some of whom arrived at 1 am or 2 am.

“It was very chaotic at the scene. Workers contracted by various labor service companies were all there. Riot police and local police came,” Li said.

“Nobody from any of the companies showed up. The police said they would pass on our request to the companies. The entrances to the factory were blocked and no more people could get in,” Li said.

The Epoch Times obtained a video (see below) showing the scene of the protest at the factory.

On Oct. 11, the Jiangsu authorities implemented power rationing for the greater Suzhou area, Kunshan, and other areas of the Yangtze Delta.

Factory production was earlier suspended from Sept. 26 to Sept. 30. Add on top of that a seven-day holiday for the Oct. 1 National Day, local companies had unprecedentedly stopped production for 11 days.

Jiang Xiaolei (alias), an employee of a labor service company in Kunshan, told The Epoch Times on Oct. 11 that the company had not recruited workers for several days.

“We are affected by the power rationing, there is less work, so fewer people are recruited,” he said.

Jiang said that Wujiang Jingyuan Computer mainly produces accessories such as routers, mobile phone fittings, and items for Apple computers. He has previously recruited for the company but not during the past two months.

The state’s power cuts in coastal provinces and cities such as Jiangsu and Guangdong have impacted migrant workers the most. Migrant workers are typically paid hourly without social welfare or benefits.

Hong Ning and Lin Cenxin contributed to the report.