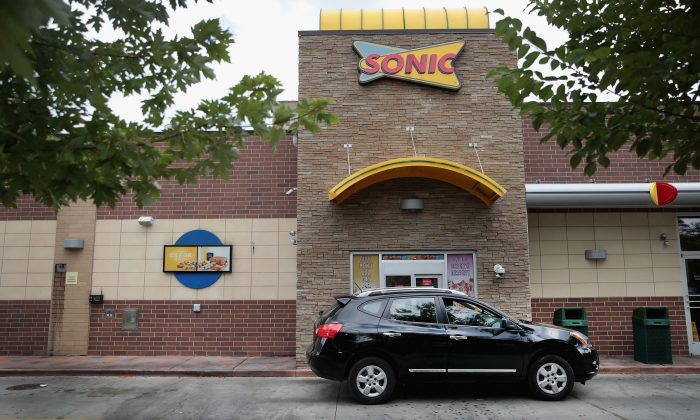 A customer picks up food at the drive-up window at a Sonic restaurant on September 25, 2018 (Photo by Scott Olson/Getty Images)
US News

Sonic Drive-In restaurant workers walked off the job at three Ohio locations and left a note blasting the new management.

OPEN BAR: Tell us the craziest way you or someone you know quit a job. I've worked for bad bosses, but I've put in my…

“Circleville, Lancaster, and Grove City crews have all walked out and quit after the franchise was bought out by corporate. The regional director, two district managers and four general managers have all been let go. All of which (sic) have been working for the company in management for 7+ years,” an anonymous source told the local Scioto Post.

Employees claimed their wages were reduced from at or near-minimum wage to the $4 per hour wage for tipped employees.

But a spokesperson for Sonic told Fox News that there had been “no wage rates at any level” after the new ownership took over.

Here’s the resignation letter from workers at the Lancaster Sonic, who quit at the same time as co-workers in Circleville and Grove City in protest of the new management: “You say racist things, you put people down and make them feel below you, you push push push push people.” pic.twitter.com/l6T48hCAxP

Fox reported that the changes prompted the employees to walk out during their shifts, turn off the lights, and lock the door behind them.

It’s not clear how long the three locations will remain closed.

Staff in Lancaster posted an email that was printed out to the door, claiming that the management is “racist.”

A spokesperson for Sonic said no wages have decreased under the new ownership.

“We recognize that changes like this can be difficult for employees to understand, and most current employees were offered the opportunity to continue working at the drive-in. Under new management, guests and the community can look forward to improved service and the famous food, beverages, and treats for which SONIC is known. Employees working for the local drive-in can look forward to fun, fast-paced work on which they can build a career, if they choose,” it said.

“No wage rates at any level decreased in this transition, although SONIC carhops often receive tips in addition to their wages. Additionally, employees may now have their paycheck direct deposited and general managers are now eligible for a new bonus program. SRI has increased the total number of employees at the eight drive-ins in the Columbus market and will continue to invest in employees, technology and infrastructure at these drive-ins in order to deliver outstanding guest service,” the statement read.

Sonic made the announcement last week about company changes.

Since the turnover, two stores were permanently closed, and eight others reopened under the new management on Feb. 25.