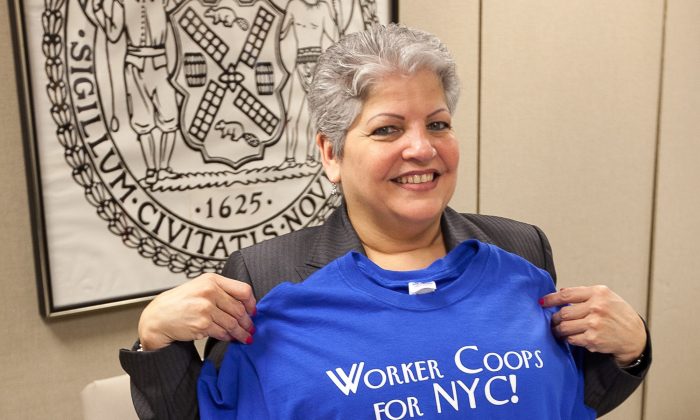 NEW YORK—Patricia Gonzales makes her living as an interpreter. A year ago she decided to join the Caracol Interpreters Cooperative, a company owned by its workers. She paid an equity fee of $500 to join and volunteers her time in management activities.

Gonzales said it is worth it since now she can negotiate better prices for her services and share in any profits the company makes.

The cooperative business model gained unprecedented attention on Feb. 24 in the first City Council meeting on the subject. Members of the Community Development Committee promised support for worker cooperatives, or co-ops, as a way to fight poverty. Most co-ops operate in low-income neighborhoods with a majority of members being women of color.

The meeting room was packed with co-op members and advocates offering success stories and asking for money.

Yadria Fragoso testified about her experience with Si Se Puede Cooperative, a cleaning business. The company was able to raise the salaries of its workers from about $8 an hour to more than $20 per hour since its establishment in 2006. The membership also rose from 15 to 51.

Fragoso said being part of a co-op is not easy and requires a “lot of patience and dedication.” But the effort she invested brought her a better lifestyle and more time for her children, as the higher pay gives her a chance to work fewer hours.

The main obstacle worker co-ops face is a lack of startup funding. Part of the problem comes from not being understood by funding institutions. Banks and government institutions are often unaccustomed to dealing with a company with dozens of owners.

The institution may require every member, or co-owner, to complete a separate set of paperwork. This process is impractical and can intimidate some co-op members who might be undocumented immigrants, according to Chris Michael of the New York City Network of Worker Cooperatives.

The network is a volunteer-run umbrella organization for the city’s co-ops. Michael said the city should offer startup grants specifically dedicated to cooperatives. He also recommended the city set an annual investment target for contracts with worker cooperatives.

Co-ops can also help by charging membership fees. Members may pay as much as $60,000 to join larger companies.

Some co-ops offer loans to new members, who would, in effect, work for lower salaries for several years to repay the loan to join. If that member quits, the loan is canceled and the member receives what was already paid.

Working co-ops go back more than 200 years, yet are still rare in New York City. Twenty-five now operate in the city with about 3,000 members.

Features of a Workers Co-operative