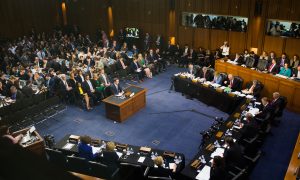 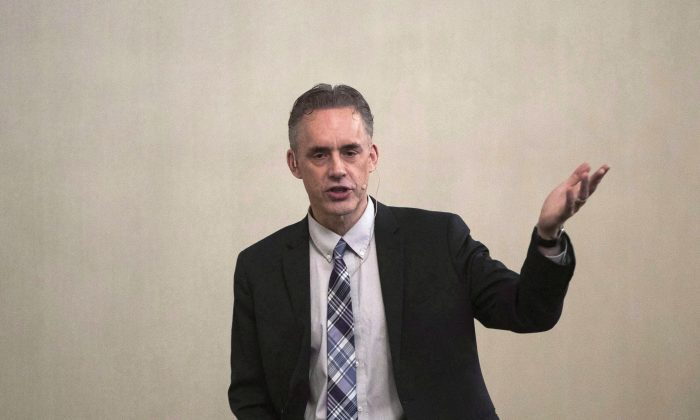 Jordan Peterson speaks to a crowd during a stop in Sherwood Park Alta, on Feb. 11, 2018. Peterson is one of several Canadians who have been the subject of “gotcha” attacks from the left in recent years. (THE CANADIAN PRESS/Jason Franson)
Viewpoints

The Perils of Words When Used for Character Assassination

There is little doubt that across Canada and the United States, men and women who identify as conservative are feeling more and more uncomfortable about expressing an opinion.

The left views this as a good thing. Conservatives, they say, harbor views that are inherently racist, xenophobic, misogynistic, and homophobic, and they have no legitimate place in the public square. This is not a new disposition for our progressive brothers and sisters, but in the era of Donald Trump, it has assumed a particular intensity. Hardly a month goes by without the discovery of a new speech crime against another virtuous victim of right-wing supremacists.

When the wheels of “social justice” turn procedural, justice is set aside, and the resulting perversion of due process is almost always the same: the perpetrator is charged and convicted in a Kafkaesque court of manipulated opinion. The sentence is loss of reputation, interruption of career, and social isolation. It occurs in workplaces, cultural institutions, and the political arena, and it’s a troubling reminder of the perverse human instinct to seek scapegoats for the resolution of self-inflicted troubles.

During such star chamber proceedings, the surprised accused becomes a stationary target. His or her past actions or remarks are amplified and distorted. Context is ignored. Motives are disparaged, and reasonable explanations are dismissed. Witnesses for the accused are frightened and discouraged. They fear the gathering mob and drift quickly away or deny their relationship with the targeted individual.

The process should be sufficient to disturb even the most cynical observers. But in the prevailing ethical climate, politicians, jurists, community leaders, educators, journalists, and influential entertainers feel entirely justified in going along with useful fictions that scapegoat selected targets and pursue the self-interested ends of those in the dominant culture.

What reasonable people might still recognize as truth, the post-modern left calls “social constructions.” They claim that traditional “narratives” generate unfair and oppressive modes of authority and knowledge. So, in progressive culture, there are no longer any facts—there are only interpretations. Interpretations are never proven or disproven by hard evidence; they can only be replaced by other more powerful interpretations.

In the arsenal of cynically ambitious, envious, or resentful social justice warriors, unkind and dishonest words have become the most lethal political weapons of our time.

An old Jewish teaching compares words to arrows. Once the bow is drawn and the arrow is released, it cannot be returned. American rabbi and author Joseph Telushkin often reminded his readers to resist exaggerating the wrong done by people who provoke our anger. “Words,” he said, “are powerful enough to lead to love, but they can also lead to hatred and terrible pain.”

Telushkin underscores his concern with a 19th-century Eastern European folktale that tells the story of a man who went through a small community slandering the rabbi. One day the man felt remorseful and asked the rabbi for forgiveness. When he offered to make amends with a penance, the rabbi asked the man to take a feather pillow from his home, cut it open, and scatter the feathers to the wind. The man did this and returned to the rabbi to ask if he was now forgiven. “Almost,” the rabbi said. “You just have to perform one last task. Go and gather all the feathers.” “But that’s impossible, for the wind has already scattered them,” the man protested. “Precisely,” the rabbi answered.

Few of us may be capable of taking this lesson to heart. In fact, many of us would have considerable difficulty refraining from hurtful or unfair talk about members of our own families and communities even for 24 hours. Nevertheless, one can’t help looking back to a time when false narratives were restrained by a religious reverence for truth and a compelling empathy for the victims of lies. People intuitively understood that murder is wrong, and “character assassination” is a metaphor for murder.

Troubled Societies and the Persecution of Scapegoats

From one generation to the next, we have witnessed a disturbing increase in the tolerance for deception within the dominant political classes of Western nations.

The works of Franco-American philosopher René Girard revealed that when powerful personal desires for power and influence are conflicted, troubled societies seek redemption through the persecution of scapegoats. Ushered in by a century of progressive education and post-modern drama, our preference for scapegoats has come full circle. It is no longer adversarial critics of Western civilization who are likely to be targeted for abuse by unfair conservatives. Now, it is the friends and supporters of free societies who must watch their backs.

Although partisans from both sides of the political spectrum have made use of character assassination, the spirit of our present age has placed conservatives at a particular disadvantage.

Conservatives tend to rally around established authorities that embody the continuation of religious, cultural, constitutional, and judicial traditions. The canon they represent celebrates virtues such as religious tolerance, individual liberty, equality of opportunity, economic freedom, personal responsibility, the rule of law, national sovereignty, the value of family, and the sanctity of life. This conservative bias toward ancient truths, established ideas, and foundational laws invites contempt from a liberal culture that believes in perpetual modern progress and personal divinity through science, technology, government, and liberation from all “absolute” moral constraints.

On June 16, 1858, Republican candidate for the U.S. Senate, Abraham Lincoln, said in what became one of the best-known speeches of his career: “A house divided against itself cannot stand.” When reason and compromise fail, almost anything can happen.