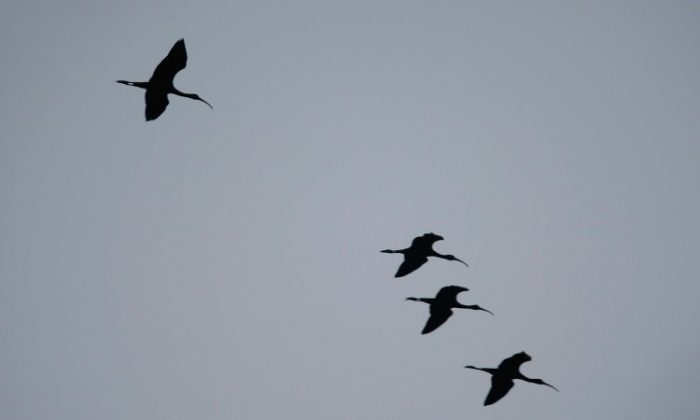 In this file photo, Wood Storks fly at Merritt Island National Wildlife Refuge on March 12, 2009, in Florida. The 140,000-acres refuge was created in 1963 as part of NASA's John F. Kennedy Space Center. (Joe Raedle/Getty Images)
US

Sometimes conservation seems fraught with lugubrious images of oiled ducks and lonesome tortoises, but in 2012, just before the Mayan apocalypse, comes bright news. The Wood Stork is breeding so well that it is ready to come off the endangered species list, according to an announcement from the U.S. Fish and Wildlife Service.

“The best part of my job is to see work pay off,” said Dan Ashe, Director of the FWS. “Sometimes with endangered species the only thing people focus on is challenges. But you can’t deny success. The population of this amazing bird is continuing to improve because of conservation efforts.” He spoke at a telephone press conference on Dec. 18.

Since 1984 the breeding population of Wood Storks has grown steadily. The threshold for it to leave the endangered species list is to have a 5-year average of 10,000 nesting pairs. Over three years, it has averaged 7,000-9,000 nesting pairs, according to Ashe. At least 6,000 pairs must nest each year for the stork to qualify as no longer endangered, and it is solidly above that benchmark.

Aside from the innate value of the animals rebounding, the regulatory value is that landowners with conservation easements can use their land more flexibly. If a threatened species lives on or nests on land, the owner can do more things with that land than if an endangered species lives on it.

“It means where a landowner has easements we can incentivize the program … it gives us more tools,” said Ashe.

The greatest danger to the bird, and to most endangered species, is development and habitat loss. Restoring and preserving wetlands are helping the storks and other birds. Wetlands provide storm buffers, prevent floods, create nurseries for seafood, and purify ground water, as well as provide habitat for birds.

“Although some habitat loss continues, current population data clearly indicate that the wood stork is benefiting from the work of private landowners and several strong partnership efforts,” said Cindy Dohner, the Service’s Southeast Regional Director. “The wood stork is expanding its breeding range using a wide variety of wetlands to forage, roost, and breed, including man-made and restored wetlands.” They once mostly bred in Florida, but have established themselves in the Carolinas and elsewhere, outside their historic range.

They are the only true stork in North America, and a unique trait of storks is that they will choose man-made habitat, according to Bill Brooks, Wood Stork Recovery Lead Biologist. For example, a long-term colony has moved in to the Dee Dot Ranch near Jacksonville, Fla., owned by the Winn-Dixie grocery stores family, said Brooks. They often nest on the grounds of zoos, he said. “Storks depend on the mosaic of wetlands throughout the Southeast.”

The FWS will announce the proposed delisting on Dec. 26, and ask for public comments.