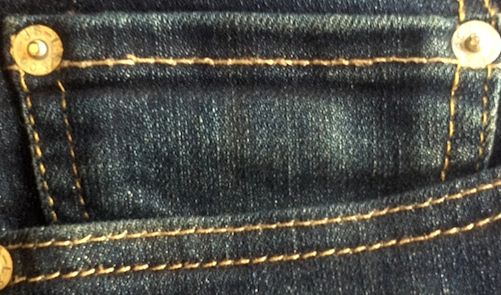 Wonder What Tiny Pocket on Your Jeans Is For? This Is the Reason

The tiny little pocket that is found in most pairs of jeans has baffled many.

It seems like they’re too small to keep anything of note inside (because it’s hard to get stuff out once you put it in).

But there actually was a use for the pocket at one time, and it’s not just for fashion.

The little pocket was originally for pocket watches (on chains), designed for cowboys and workmen in the 1800s. The pockets have remained ever since.

The small pocket in Jeans pockets is called “Watch pocket” to store watches; before the invention of the wrist watch. pic.twitter.com/rFEYAEHeRN

“Originally included as protection for pocket watches, thus the name, this extra pouch has served many functions, evident in its many titles: frontier pocket, condom pocket, coin pocket, match pocket and ticket pocket, to name a few,” according to the Levi Strauss website.

“Not only is the pocket extremely useful for holding tiny trinkets, it is also … loved by denimheads for the faded and worn nature it takes on over time.”