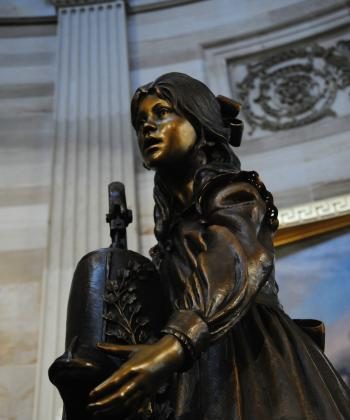 A statue of Helen Keller in the US Capitol Rotunda in Washington, DC. Keller (1880-1968) was a US author, political activist and lecturer and was the first deaf blind person to earn a Bachelor of Arts degree. (Karen Bleier/Getty Images)
US

Paul Darin
View profile
Follow
biggersmaller
Print
Following Black History Month in February, it is time to celebrate the sacrifices and contributions of women. March is Women’s History Month, a time to look back and reflect upon the women who pioneered and sacrificed so we could live in a better world. The topic of women’s history outside of a few footnotes in a college or high school textbook was once overlooked.

The 1970s brought women’s rights into a brighter spotlight as changes around the country about human rights gained momentum.

According to the Library of Congress, the Educational Task Force of the Sonoma County Commission on the Status of Women in California started a Women’s History Week celebration in 1978. Originally, the plan was to coincide with International Women’s Day on March 8.

As the celebrated week grew in popularity among local schools and when other organizations became involved, like the Women’s History Institute at Sarah Lawrence College, an effort materialized to make Women’s History Week a national event declared by Congress. That happened in 1981 when Sen. Orrin Hatch (R-Utah) and Rep. Barbara Mikulski (D-Md.) cosponsored a bipartisan resolution to have Congress declare a Women’s History Week.

The annual week of celebration expanded into a month in 1987 when the National Women’s History Project petitioned Congress to expand it into the full month of March.

Since the days of Joan of Arc, a 15th century peasant girl from France who commanded armies and changed the course of the Hundred Years War, and Mulan, who joined the Chinese army in place of her ill father around 400 A.D, women have changed history. According to legend, Mulan went on to defeat the armies of the Mongols and the Middle East while receiving a dozen or more commendations. These women seeded the spirit of the women of today and tomorrow who fight against tyranny for the U.S. and allied forces in lands far from home.

Of course, women who change the world don’t need to always do so as soldiers. For instance, Harriet Tubman was born a slave and eventually worked on the Underground Railroad, which helped dozens of other slaves reach freedom.

Amelia Earhart was a distinguished female aviator who set many records including being the first women to fly solo across the Atlantic. While attempting to fly across the globe in 1937, her plane disappeared. Neither she nor her plane and co-pilot were ever seen again.

Helen Keller, another great American woman, was rendered both deaf and blind in the 1880s as an infant due to an illness. She rose above that condition to become the first deaf and blind person to earn a bachelor’s degree. She was an outspoken socialist as well as anti-war supporter and humanitarian. She also worked hard in favor of workers' rights and women’s suffrage.

Many events in Women’s History Month will celebrate the women who have sacrificed so much. The Legacies of America’s First Ladies was an American University (AU) School of Public Affairs conference on March 1. It was hosted by historians, journalists, authors, curators, first lady Michelle Obama, former first lady Laura Bush, and Secretary of State Hillary Clinton. The speakers examined the role of the first lady and what choices and sacrifices they make to serve as a pillar of support not only to the president but to the nation.

“A first lady’s role may be mysterious to many, but these leaders behind the leaders help effect change and advance our society in valuable ways. I’m thrilled that AU recognizes the impact first ladies have had on history and sees this as an emerging topic to study and research in the American political process,” said Anita McBride in an American University press release. McBride was former chief of staff to first lady Laura Bush.

Universities and museums across the nation celebrate Women’s History Month in their own way. This would also be a great time to visit the Smithsonian, the National Museum of Women in the Arts located in Washington, or the Daughters of the American Revolution Museum also located in Washington. The National Constitution Center in Philadelphia has many interactive exhibits and programs specially designed in honor of Women’s History Month. Both the Intrepid Sea, Air, and Space Museum and Museum of the City of New York in New York City have month-long programs and exhibits honoring women.