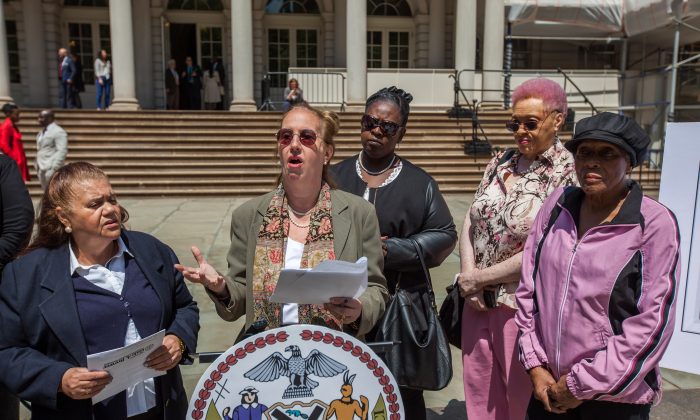 In this file photo, Manhattan Borough President Gale A. Brewer talks about summer food program at a press conference in front of the City Hall, Manhattan, May 29. (Petr Svab/Epoch Times)
New York

The measure is to celebrate Aug. 26 as Women’s Equality Day and the anniversary of the 19th Amendment. Improving female voter percentages might make a difference on several women’s rights issues, said officials.

In particular, she referred to the Hobby Lobby decision in June, which limits women’s coverage for contraceptives depending on the corporation managers’ religious beliefs.

“Just look at what happened this year when five male Supreme Court justices decided that a woman’s boss can restrict her medical insurance coverage so as not to offend the boss’s personal beliefs,” said Maloney. “Gender discrimination continues on this anniversary of Women’s Equality Day.”

Manhattan Borough President Gale A. Brewer, who led the conference, agreed, noting that voting was another step toward gender equality.

Former Borough President Virginia Fields elaborated on the consequences of not voting. “When women do not vote and they are disappointed with who is elected…they have no one to blame but themselves because they didn’t vote.”

Maloney touted the Equal Rights Amendment (ERA) to the Constitution as a countermeasure to protect women’s rights.

A high school student and intern for Brewer, 15-year-old Sarina Gupta, described having a passion for voting since she was five years old and her parents took her to the polling stations.

“Voting is something I am very excited about. It’s a right that I value and can’t wait to exercise for myself,” said Gupta.