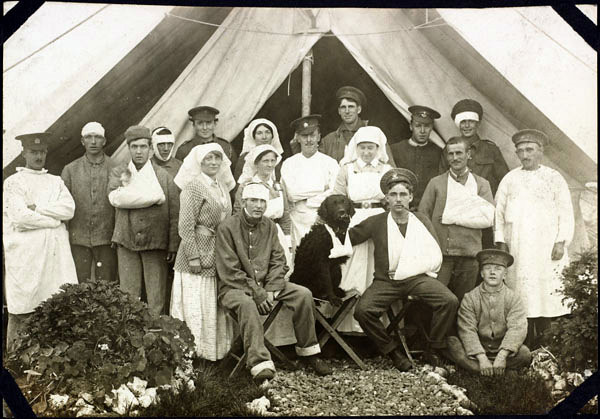 Nursing sisters, patients, and a dog pose for a photo outside a ward tent at No. 2 Canadian General Hospital in Le Tréport, France, in 1917. (Library and Archives Canada)
Canada

The story of Canada’s nursing sisters is one of courage, loyalty, compassion, and devotion to duty as they endured the unimaginable hardships of war to care for the casualties of the battlefield.

Working in substandard and often dangerous conditions that they were ill prepared for, especially in the First World War, they bravely adapted to the situation and drew on their knowledge to treat and comfort the soldiers in their care.

The First World War, too, brought industrialized warfare into full force for the first time, with new advancements in weaponry causing horrendous wounds, and air raids behind the lines even hitting some Canadian Army Medical Corps hospitals.

It was in 1885 that the nursing sisters first performed formal military service, ministering to the Canadian troops sent to put down the North-West Rebellion. Only seven nurses served in Moose Jaw and Saskatoon, and for a short time, but it was enough to show that “battle nurses” could play a vital role in wartime, following the tradition begun by Britain’s Florence Nightingale in the Crimean War.

Eight nursing sisters served in South Africa’s Boer War, where they had to cope with not only the usual battlefield-inflicted injuries but also large outbreaks of disease and infection due to the hot climate and poor sanitation.

The Canadian Army Medical Corps was created in 1904 with just five army nurses and some civilian nurses. When war was declared in 1914, matron-in-chief Margaret Macdonald, who had served in the Boer War, was tasked with the job of recruiting and mobilizing civilian nurses.

An appeal was launched, and trained nurses from all over the country offered their services. Of the approximately 3,000 who enlisted, 2,500 went overseas and served in England, France, Belgium, Russia, and in the Mediterranean at Gallipoli and Salonika.

Nicknamed “Bluebirds” by the soldiers because of their blue uniforms and white veils, Canadian nursing sisters held military rank, unlike those serving with other armies. Macdonald became the first woman in the British Empire to hold the rank of major.

The nursing sisters tended the wounded in stationary hospitals, on hospital ships, and in casualty clearing stations. By necessity, the clearing stations were near the front lines, which put the nurses at great risk.

“The nurses would stay with the wounded even as the enemy approached, because normally the battle would be preceded by an artillery barrage from the enemy, and of course this would be falling in the trenches and behind the lines where the nursing sisters were looking after the wounded,” said Brian McFadden, president of the Nanaimo Military Museum, which has a display on Canada’s nursing sisters.

The injured soldiers would be brought off the battlefield by stretcher bearers and, after being treated at the clearing stations, would be sent to their own country’s hospital, McFadden said. During an offensive, a clearing station might be completely overwhelmed.

“It was just a steady stream of wounded soldiers.”

Laura Gamble of Wakefield, Quebec, served aboard a hospital ship in the Mediterranean. In a diary she left behind, she describes bombs raining down during an air raid.

“We had another air raid. This time the bombs were dropping all about us. Everyone was more or less terrified and one cannot soon forget the horrible whizzing noise of those bombs. … After this raid, fatigue parties were sent to dig dugouts for the sisters, which were to be bomb-proof,” she wrote in the diary, held at Library and Archives Canada.

Canada had no military troops in the Mediterranean but did provide five medical units to support British forces fighting in Gallipoli, Salonika, and Egypt. In his book, “Canada’s Nursing Sisters,” Col. G.W.L. Nicholson describes some of the challenging conditions faced by the Canadian medical units during the Gallipoli campaign.

“It was characteristic of the element of unpreparedness associated with so much of the Gallipoli campaign that no sanitary provisions had been made for the Canadian units before they arrived,” he wrote.

“Each hospital depended for its water on a single cart, which daily brought in from a considerable distance a very limited supply. … Food was scarce, and of poor quality, often impossible for sick patients to eat.”

The Great War was the first time chemical warfare was used, when in April 1915 German forces launched a major poison gas attack at Ypres, Belgium, devastating the Allied line.

Among all the horrors of the war, gas was one of the worst things both the soldiers and the nurses had to deal with. Gas injuries were extremely painful, but there was little treatment; mostly all the nurses could do was to comfort the afflicted soldiers to the best of their ability. Gangrene caused by mustard gas getting into an open wound was a widespread problem.

“At the outset of the First World War, no one was prepared for gas and so there were no gas masks issued,” said McFadden. “It wasn’t until later in the war when gas was used a lot that they issued gas masks.”

Depending on where they were stationed, some nurses had better living conditions than others. For those closer to the lines of combat, a constant problem was vermin—most notably fleas, mosquitoes, and rats. The rats were fearless in their quest for food and even attacked patients.

In France, Africa, and the Mediterranean, the nursing sisters laboured in often extremely primitive conditions, all the while coping with an exhausting workload. In addition to battlefield wounds, there were also outbreaks of infectious diseases to deal with, and there were no antibiotics to fall back on in those days.

The nursing sisters encountered death on a daily basis, and it also struck their own ranks. In 1918, two Canadian hospitals in France took a direct hit by enemy bombers and several nurses were killed while on duty.

Fifty-three nurses in total were killed in the war, either from enemy fire, disease, or drowning. Fourteen died when the Canadian hospital ship Llandovery Castle was torpedoed by a German U-boat in 1918. It was the deadliest Canadian naval disaster of the war, killing 234 people.

Like the soldiers, the sisters received awards and decorations in recognition of their courage. The first nursing sisters to be awarded the Military Medal for gallantry were Eleanor Thompson from Valleyfield, Quebec, and Meta Hodge from Winnipeg.

After an air raid on No.3 Canadian General Hospital at Doullens, France, Thompson and Hodge were buried under rubble. They managed to pull themselves out and, ignoring their injuries, worked through the night to extinguish fires caused by overturned oil stoves, treat wounds, and guide the patients to safety.

Nine nursing sisters received the Military Medal. Gamble was awarded a Royal Red Cross 2nd Class medal for her “greatest possible tact and extreme devotion to duty.” In all, 328 were decorated by King George V.

By the end of the war, the nursing sisters had proven that they could more than handle conditions on the front—heretofore an exclusively male domain. They had won the admiration of not only the military brass but also of thousands of soldiers who often affectionately referred to them as “Sisters of Mercy” or “Angels of Mercy,” and they paved the way for the Canadian military nurses who served in the Second World War and the Korean War, on up to today.

In the last paragraph of his book, Nicholson said that in whatever conflict they served, “the medical services of Canada have earned a high reputation for the skill and devotion with which they played their special part.

“Canadian Nursing Sisters are justifiably proud to have borne their share alike with officers and men in the great contribution made by the medical services. Of these dedicated women it may be said ‘They served equally.’”