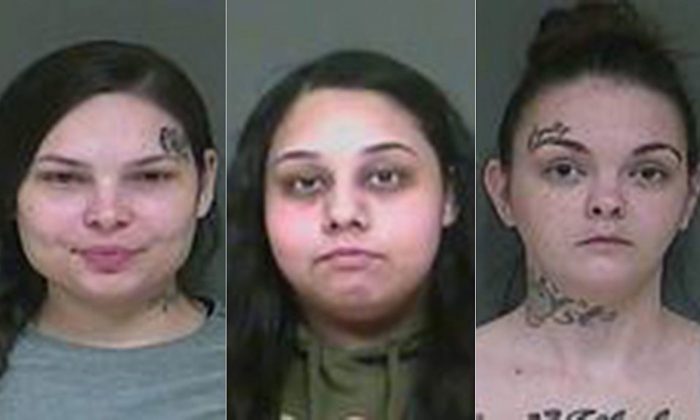 Police in Indiana arrested three accused female members of the “Felony Lane Gang” who allegedly taunted law enforcement officers in an Instagram post that said, “do ya job [expletive].”

“Three adult females who were wanted on felony warrants in the state of Georgia allegedly took to social media to taunt law enforcement by saying ‘Do your job [expletive],'” Indiana State Police said, adding, “that is exactly what Trooper Christopher Waltz did, he did his job by putting these fugitives in jail.”

The three women, it later emerged, were wanted on felony warrants in the state of Georgia. In January, the Covington Georgia Police Department issued a “Be On the Lookout” (BOLO) alert that included surveillance photos and identifying information for each of the females.

The Covington Police Department said at the time the group had broken into cars across Newton County, Gwinnett County, Clarke County, and possibly Florida. Police said the break-ins occurred in locations like parks and gyms, and that the thieves typically used rental cars to commit the crimes.

“They might be taunting us with what they’re posting on social media,” Officer Justin Stott with Covington Police told FOX5 on Feb. 12. “With all the active warrants we’ve got on them through all these different jurisdictions, it’s just a matter of time before we get them.”

Indiana State Police said in the release that officer Waltz was patrolling I-70 about 15 miles east of Indianapolis when he spotted a white Nissan Sentra being driven at an “excessive speed.”

Waltz said that as he pulled in behind the vehicle—but before activating his emergency lights—the driver of the Nissan allegedly “made an abrupt lane change from an exit only lane, back onto the interstate.”

The trooper switched on his lights, but the driver of the Nissan failed to stop, triggering a police pursuit. Other police agencies—Henry County Sheriff’s Office and officers with the Shirley Police Department—joined the chase.

Eventually, the escaping vehicle was “brought to a controlled stop on I-70 near the 120-mile marker,” according to the police, and all three occupants were arrested.

After arresting the women, police impounded the Nissan and carried out a search.

They found a “substantial amount of credit cards, check books, social security cards and identification cards belonging to people not in the vehicle.”

Police said the items were later determined to be stolen property.

The suspects were booked into the Hancock County Jail.

The women are expected to face charges in Indiana in connection with the alleged police evasion, and may be extradited to Georgia to face outstanding criminal allegations.

Police said the two women—Dusty Wheaton and Alisha Mowery—tried to fraudulently cash a check at the State Employees Credit Union drive-thru on April 18.

After they were denied service, the women sped off, WSOCTV reported. Their vehicle was later spotted by police and they were taken into custody.

Wheaton and Mowery were charged with possession of a stolen vehicle, attempting to obtain money by false pretense, and financial card theft.

Police said they believe the women were part of a larger criminal organization—called the “Felony Lane Gang”—based out of Florida.

The way the “Felony Lane Gang” operates, according to police cited by WSOCTV, is that typically male members break into “mom-driven” vehicles to steal victims’ identification, while female members of the gang impersonate the female victims and commit fraudulent financial transactions.

Police said the female gang members put on wigs and change their appearance to look like the victims when they attempt to carry out bank transactions in their name.

“They’re willing to go to a lot of lengths to make themselves look like these victims,” Matthews Police Lt. Tim Aycock said, according to the station.

The criminals use stolen cars or those that have been fraudulently rented under the name of the victim and typically go through the farthest outer teller lane of a bank drive-through. Police said this is where the name “Felony Lane Gang” comes from.