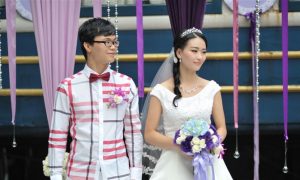 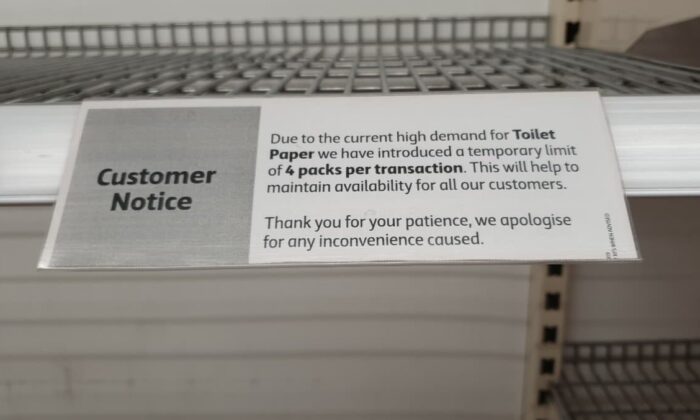 A notice limiting the volume of toilet paper customers can purchase is seen at a Coles supermarket in Melbourne, Australia, on March 7, 2020. (Alan Cheung/The Epoch Times)
Australia

Women Charged After Fight Over Toilet Paper in Australia

Two women have been charged after a fight over toilet paper broke out at a Sydney supermarket, prompting police reminders the spread of coronavirus has not created a Mad Max-esque dystopia.

A video of the incident went viral on social media and showed a group of women yelling and fighting over a packet of toilet paper amid panic buying.

The video shows one woman pulling the hair of another during the heated altercation at a Woolworths store in Chullora on Saturday morning.

One woman yells: “I just want one packet.”

A 49-year-old woman, who had allegedly been assaulted, was not injured.

Two other women, aged 23 and 60, have been charged with affray and will appear in Bankstown Local Court on April 28.

NSW Premier Gladys Berejiklian was unimpressed by the women’s behaviour and reminded the public coronavirus was not fatal for most people.

“I cannot understand the logic—we have a big factory in Penrith that produces toilet paper, a big factory in South Australia that has pallets moving out the door,” Ms Berejiklian told reporters on Sunday.

“Everybody please stay calm and be rational, we have everything we need.”

NSW Police acting inspector Andrew New said after Saturday’s incident that people were panicking needlessly because there are sufficient supplies.

“It’s not the Thunderdome, it’s not Mad Max, we don’t need to do that.”

Supermarkets have begun imposing limits on the sale of toilet paper after having their shelves stripped by hysterical shoppers.