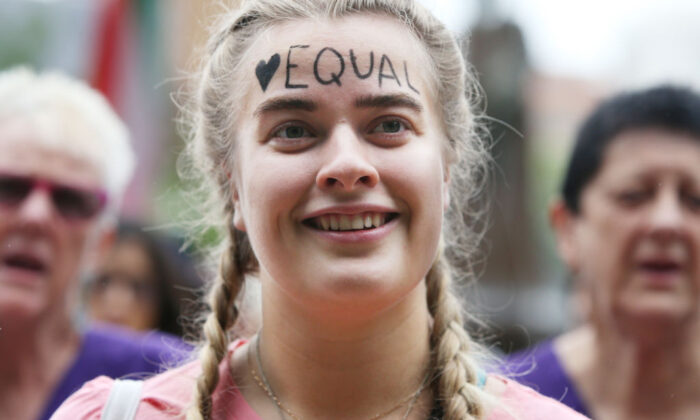 A woman smiles with the word "equal" written on her forehead as she gathers in Hyde Park during the International Women's Day march in Sydney, Australia, on March 7, 2020. (Lisa Maree Williams/Getty Images)
Viewpoints

For the last few weeks in Australia, we’ve been treated to the unabashed celebration from our biased media about the ousting of the Liberal-National Coalition government and wild assertions that this was all due to angry women turning on former Prime Minister Scott Morrison. No mention, of course, of the fact that conservative parties everywhere are now struggling to attract women.

Irrespective of how desperately the Coalition tried to win them over, women are turning left. Five years ago, I wrote about the growing power of left-wing women, making the point that women are becoming more left-wing in their policy preferences—not only in Australia but across much of the Western World.

Analysis by the Australian Election Study (AES) of 2019 election results (pdf) confirmed an ever-widening gender gap, starting back in the 1990s, marked by dropping female support for the country’s centre-right Liberal Party.

By 2019, 45 percent of men and 35 percent of women voted Liberal, while the split for the Greens was nine percent men to 15 percent women.

The AES asked voters to rate themselves on a scale from left to right, where 0 is left and 10 is right. In 2019 the average position for men was 5.2, whereas for women, it was 4.8, a significant shift from the 1990s when there were minimum gender differences.

One of the key factors I identified back in 2017 for why the shift was occurring was leftist university education.

“The hearts and minds being captured in our universities belong mainly to young women,” I wrote, pointing to fascinating research from the AES showing women emerge from university education notably more left-leaning than women without degrees. In contrast, male graduates were not very different from less-educated men in their political views.

Women’s increasingly left-wing policy preferences have been showing up in AES data on issue after issue: asylum-seekers; government spending on indigenous affairs; stiffer criminal penalties; positive discrimination for women, and same-sex marriage. The 2017 postal survey on same-sex marriage showed that more women voted yes in every age group from 18 through to 75.

Over 60 percent of graduates are now female, so women are disproportionately affected by the ideological indoctrination taking place in our universities, particularly as they are mainly the ones studying humanities subjects steeped in identity politics and neo-Marxist propaganda.

Unlike many men who become more conservative as they age, the work/life patterns in most women’s lives simply reinforce these beliefs. Women predominantly work in education, health care, and welfare services or as public service professionals. They make up 58 percent of public service positions and are more likely than men to work in unionised jobs. All this means their working environment provides a culture that supports rather than challenges their political beliefs.

Then there’s the motherhood issue, with mothers particularly receptive to the left’s big-spending promises—and scare campaigns—on health and education. The growing number of single mothers significantly dependent on government benefits is another key issue, with the left-wing parties playing up their support for such disadvantaged families.

So, it goes on. Hardly surprising then that polling suggests the indoctrinated mob of professional women flocked to the Teal faux “independents” with their trendy list of leftist policy proposals. No doubt, when proper analysis of the gender gap in this election is available, we will discover even more women across the board may be turning their backs on traditional conservative beliefs.

Yet the biggest risk for the conservative parties currently licking their wounds is to believe the left-wing media claim that they were ousted by the wrath of angry women.

Somehow, we need to convince Coalition politicians that they are also bleeding votes from ordinary folk who are tired of seeing women endlessly privileged whilst the men they love, their fathers, sons, brothers, and friends, get pushed to the back of the bus and denied fair treatment at every turn.

It wasn’t that the Morrison government didn’t listen to women. Remember the apology to Brittany Higgins? Or Morrison’s forced smile when Grace Tame humiliated him with her side-eye? Or allowing MPs Christian Porter and Alan Tudge to be pushed out of their ministerial roles over unproven sexual assault allegations? Or the cringing over the parliamentary harassment report, denying the very low incidence of actual harassment and high rates of female bullying?

We’ve seen successive Coalition governments give ground to the feminist lobby, throwing endless money trying to appease their insatiable appetite for an obscenely large slice of the cake. Malcolm Turnbull’s first act as prime minister was his plea for “respect for women” as he announced the first $100 million (US$70 million) of the bucketloads of funding poured into the domestic violence industry.

Last year, Scott Morrison topped up these rivers of gold with a 150 percent increase in funding, from $100 to $250 million per year, as a result of the feminist’s COVID-19 scare campaign about women being locked up with dangerous men.

Recent Coalition governments have gone in for the shameless promotion of women into every conceivable public role. We had Susan Kiefel appointed Chief Justice of the High Court. Ita Buttrose as Chair of the ABC. Lorraine Finlay for Human Rights Commissioner. Cathy Foley as Chief Scientist. Women, women, women. A constant stream of beaming female faces is endlessly gracing our news.

Former Deputy Prime Minister John Anderson recently published a long video conversation with me covering in detail the evidence of how feminist ideology now dominates public policy, advantaging women at the expense of men through distorting our media, tilting our laws, promoting anti-male ideology in schools and workplaces, and consistently manipulating government statistics to demonise men. For this conservative leader, it came as a surprise that the movement had taken place under his government’s own watch.