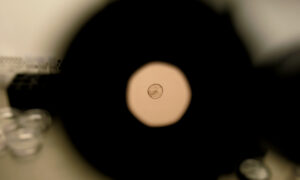 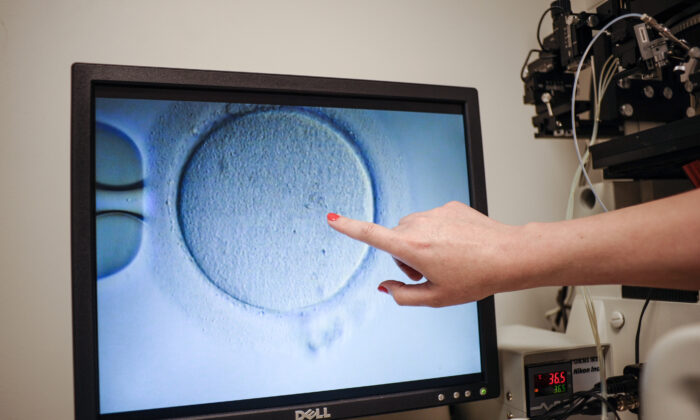 An embryologist shows an ovocyte after it was inseminated at the Virginia Center for Reproductive Medicine, in Reston, Va., on June 12, 2019. (Ivan Couronne/AFP via Getty Images)
Viewpoints

Women Are Not Egg Vendors

I have been writing and producing documentary films about the many health risks of egg “donation” for years now. I put “donation” in quotes because the reality is that women are offered large sums of money to sell their eggs.

There is no donation taking place here, in the truest sense of the word. Unlike organ donors who aren’t paid, egg “donors” are treated like vending machines and paid for a dozen or more of their eggs.

Because of my work, it is refreshing to see some news stories that caution that this is a harmful procedure. And so I read with a mixture of pleasure and concern this headline and subsequent story, “Women Who Carelessly Donate Eggs Risk Ovary Shutdown, Infertility, Experts Warn.”

First, young women, between the ages of 20 and 29 are typically put on a drug called Lupron to suppress ovulation to put the ovaries into a medically induced menopause—to stop ovarian function. This is done to control the woman’s cycle of egg production and release.

Lupron in egg donation is an off-label use as the drug has not been FDA approved for this purpose. Lupron also carries a category X rating, which means if the young woman is pregnant or gets pregnant while taking Lupron, she is at risk of having a baby born with fetal abnormalities in addition to other risks.

Next, the woman is put on high-dose fertility drugs to cause super-ovulation in order to produce lots of eggs, often several dozen or more. As most egg donors are paid in the thousands of dollars, agencies want as many eggs as they can get, not the one egg normally produced in a monthly cycle.

Finally, before the eggs are surgically removed, she receives another hormone “trigger” shot to release the eggs from the follicles they developed in, making the harvesting of the eggs easier for the physician doing the procedure.

The short- and long-term risks to women can be quite severe. You can read more at length about them here, but they briefly include ovarian hyperstimulation syndrome (OHSS), ovarian torsion (twisting), kidney failure, stroke, loss of fertility, and premature menopause.

Of course, in the article on the carelessness of women in donating their eggs, the list of long-term side effects such as cancer or damaged fertility isn’t listed. Perhaps they are not mentioned because, as is explained in an article published by the National Center for Biotechnology Information, “few studies have examined the long-term medical effects of egg donation, such as fertility, cancer, and other potential health risks, and each study has had methodological shortcomings and varying lengths of follow-up.”

It’s hard to inform women of the risks when the studies are so limited. Women are told there are few known risks, when they should be told that we’ve never done serious research into this, so we don’t know what those risks are.

In fact, if you read this article, the only key takeaway, that is repeated five times, is that the risks come when a woman sells her eggs more than six times, and this risk is due to the repeated exposure to high-dose fertility drugs.

Two suffered massive strokes due to severe OHSS, and neither of these women will ever be able to have their own children. Their fertility was so damaged they are now infertile.

One woman suffered severe OHSS but fortunately got medical treatment fast enough to drain the massive fluid built up in her body so that she was spared a stroke.

One was rushed back into the operating room because an artery was cut during the egg retrieval process, and she experienced massive hemorrhaging. She eventually needed in vitro fertilization to have her own children, as her fertility was damaged by the egg donation procedure.

Finally, another had a torsioned ovary that went undiagnosed for several days, eventually leading to emergency surgery to remove her ovary. A few years later, she was diagnosed with bilateral breast cancer, with no prior history in her family of breast cancer.

Egg donors are screened out and not selected if they have any history of cancer. But researchers are calling for more studies such as this paper, “Long-term breast cancer risk following ovarian stimulation in young egg donors: a call for follow-up, research, and informed consent,” where five cases of otherwise healthy women who sold their eggs developed breast cancer.

So much for the risks associated exclusively with the more than six-time egg “donor.”

Get Out of Jail Free

But, what about that careless woman who sells her eggs more than six times? Does she even know this is a recommended guideline by the American Society of Reproductive Medicine (ASRM)? No. Are fertility doctors required to follow this guideline? No.

My short documentary, “Maggie’s Story,” tells of one woman who sold her eggs 10 times. Maggie’s fertility doctor never once told her that he wasn’t following his professional society’s guidelines. In fact, because Maggie was such a good producer of eggs, meaning they made a lot of money off her eggs, she was asked to come back again and again and again.

Now, Maggie lives with a stage IV breast cancer diagnosis and has lost her own ability to ever have her own children, while the physician suffers no ramifications, because guidelines are just that, guidelines. Like a suggested donation at the museum.

What is so magical about the number six? The ASRM makes two points that cause them to land on that number. First is, “inadvertent consanguinity” which is the risk that one woman will be responsible for creating many babies from her eggs, who may grow up and marry each other.

The definition is, “the fact of being descended from the same ancestor.” This is a very real concern for the growing number of “donor conceived” people.

Second, there are the health risks of OHSS and diminished or lost fertility, but the fertility doctors’ have a “get out of jail free” card. The ASRM guidelines say, “currently, there are no clearly documented long-term risks associated with oocyte donation, and as such, no deﬁnitive data upon which to base absolute recommendations. Furthermore, there is a paucity of long-term follow-up data for repeat oocyte donors.”

No documented long-term studies on the risks. No definitive data. A paucity of long-term follow-up. Women are not vendors. These fertility doctors are egg poachers, risking women’s health to line their pockets while women are scolded and told: just don’t be careless and do this six times and all will be well.

Jennifer Lahl is the founder and president of the Center for Bioethics and Culture and producer of the documentary films, “Eggsploitation,” “Anonymous Father’s Day,” “Breeders: A Subclass of Women?” “Maggie’s Story,” and “#BigFertility,” which was an official selection in the Silicon Valley International Film Festival. Her new film, “Trans Mission: What’s the Rush to Reassign Gender?” was released June 17, 2021.

Jennifer Lahl
Follow
Jennifer Lahl is the founder and president of the Center for Bioethics and Culture and producer of the documentary films, “Eggsploitation,” “Anonymous Father’s Day,” “Breeders: A Subclass of Women?,” “Maggie’s Story,” and “#BigFertility,” which was an official selection in the Silicon Valley International Film Festival. Her new film, “Trans Mission: What’s the Rush to Reassign Gender?” was released June 17, 2021.
TOP NEWS