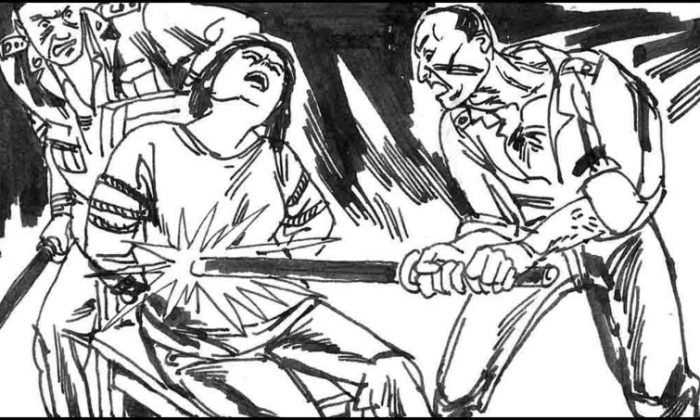 Du Bin, a New York Times photographer, recently made a documentary film based on interviews with former female detainees at Masanjia forced labor camp in China’s northern Liaoning Province. He named it “Women Above Ghost’s Head,” because the place was built on top of a graveyard.

Du wants his fellow countrymen to know what’s going on behind the gates and walls of this ghostly place.

The 99-minute movie records 12 former Masanjia inmates’ stories in front of the camera. They include female petitioners, and practitioners of Falun Gong, who describe the horrendous torture they were subjected to by police women, such as the tiger bench, electric shocks, and being being stretched or shackled to a cross.

Du told the Sound of Hope (SOH) Radio Network that he chose Masanjia over all the other labor camps in China because torture is so common there, and more former detainees have spoken out about the abuse they suffered.

“The purpose of producing the film is to let the public know what they should know. At Masanjia, they don’t treat females as women, rather they torture them and force them into slave labor,” Du told New Tang Dynasty (NTD) Television in a separate interview.

“This should be a very important work in the history of Chinese documentaries,” he said, speaking to SOH, “I need to let our children know that this kind of torture was invented in 21st century China.”

“I’m also telling Chinese Communist Party leaders this: You too were born by a woman. Take a look–things like this have happened in labor camps under your watch.”

In 1999, Du learned that Masanjia set up a special facility to detain practitioners of the Falun Gong meditation discipline. Many steadfast Falun Gong practitioners, mostly women, from different areas were transferred to Masanjia.

“Authorities thought practitioners who were not ‘transformed’ in other places would definitely be transformed at Masanjia,” he said.

According to Du, communist officials have a higher success rate of transforming Falun Gong practitioners than at other places, because they use “horrifying torture.”

Du has interviewed both female and male Falun Gong practitioners, who were detained at Masanjia.

Liu Hua was detained three times at Masanjia for petitioning. During her stay, she made the acquaintance of an elderly Falun Gong practitioner named Xin Shuhua. This woman told Liu that in 2000, 18 female practitioners were stripped naked, thrown into male prisoners’ cells, and raped.

“They wanted to destroy practitioners’ will and force them to give up their belief,” Xin told Liu. “Because they knew they wouldn’t give in and denounce their belief, so they made them suffer.”

Du told NTD that Chinese media’s recent exposure of torture at Masanjia is less than 30 percent of what is happening across the country. According to his research and interviews, there are countless cases of torture happening in hundreds of Chinese labor camps.

From April 2000 up to today, the Falun Gong website Minghui.org has published 8,109 articles, commentaries, and special editions exposing the torture suffered by practitioners at Masanjia labor camp.

“When Chinese people in the mainland learn what has been happening, I believe ordinary people will not be able to accept it. This may lead Chinese to think the regime should cease to exist,” Du said.

Officials from different levels of the Justice Department and Bureau of Re-education Through Labor pay regular visits to labor camps, according to Du.

“Claiming that they are not aware of the abuse at Masanjia—I don’t believe it at all,” he said. “All these officials should be held responsible for what happened.”

“They are well aware of what’s going on in the labor camps, because the Chinese regime has a pretty sophisticated intelligence network,” he added.

Although torture and abuse at Masanjia have been extensively covered by overseas Chinese media, Du said communist authorities were not concerned as long as people in the mainland are unaware.

“Women Above Ghost’s Head” will have an online public screening on May 1.

“I hope more people pay attention to independent documentary filmmakers like myself,” Du said. “It will help the Chinese to step forward and tell the truth.”