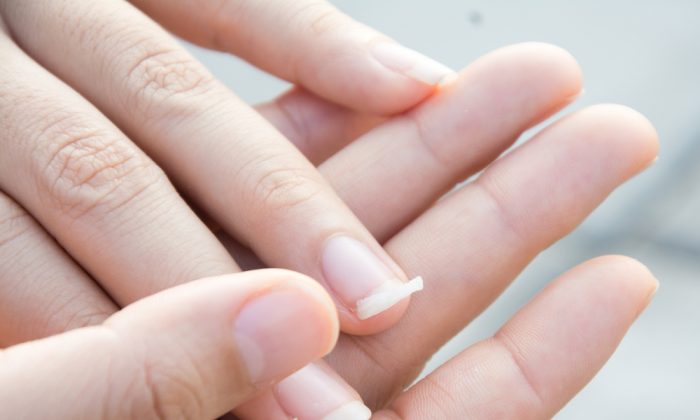 A woman said she shared a photo of her “ugly” curved fingernails and got warnings back from commenters that it’s actually a sign she may have cancer.

Jean Williams Taylor noticed her nails were curving and went on Facebook to ask why.

“I’d been working in a factory so my nails were really short. I got an office job about six weeks ago and they decided to grow,” Taylor told the Manchester Evening News. “I’ve always had weak nails and I’ve never got them to this length because they were never strong and I was working in a factory. But now I think I could knock a nail in with them.”

Taylor, a grandmother of three, agreed to visit the doctors after her daughter also told her about the potential risk of curved nails.

Taylor was immediately given an X-ray and blood tests after the doctors became seemingly alarmed. She also got a CT scan, an MRI, a lung biopsy, and a PET scan.

The report said she was then diagnosed with Stage 1 lung cancer in both her lungs.

“These nails are my lifesavers and I’m not cutting them off,” she said, Meaww reported. “I’d been working in a factory so my nails were really short. I got an office job about six weeks ago and they decided to grow. I’ve always had weak nails and I’ve never got them to this length because they were never strong and I was working in a factory.”

“2 weeks ago i posted this pic on my wall asking if anyone had seen nails like this. A few google post later and i was urged to go to the Doctor. A tad extreme i thought….
I was rushed for blood tests and a chest xray, 2 days later i got a phone call to go for a CT scan, 2 days later a PET scan and more blood test, the day later a breathing test on my lungs and a scan on my heart, the day later an MRI scan then a lung biopsy.

After a gruelling 2 weeks, yesterday I got my results…….Cancer in both my lungs !!!!.

When your nails curve its often linked to heart and lung disease and its official term is ” clubbing” i had no idea….Did You ????

Hope this post can help someone else in the early stages of cancer.

Big shout out to the NHS you have been excellent and I thank all the staff that have dealt with my diagnosis.”

A light brown stripe on one’s fingernail shouldn’t be taken lightly, as one woman’s story shows.

“There was a brown line across my nail for, I would say, a few years,” Julie, a New York woman who didn’t give her last name, told CBS New York about the line across her nail.

She added, “It started as a light line and then it eventually started getting wider and the middle of it started to get really black.”

Julie was later diagnosed with malignant melanoma of the nail bed by Dr. Dana Stern, a specialist.

“Just like you have moles on your skin you can have a mole on your nail matrix which is where the nail grows from,” CBS quoted Stern as saying.

The patient, according to the report, eventually needed surgery to remove her nail and the tissue.

“Just be proud that you’re a survivor,” Julie said, adding that she covered up her nail but no longer has to.