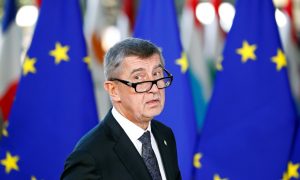 Woman’s Quintuples Are a ‘One in Every 480-Year’ Event

Doctors were amazed when a Czech woman gave birth to quintuplets, saying it was the first time in the history of the country.

Alexandra Kinova of Milovice, Czech Republic, had ups and downs in her pregnancy. Weeks before delivering the children, according to the Daily Mail, she didn’t know she was pregnant with five babies.

Kinova was in shock when she was told the news, and she originally believed she would have twins.

“When we finally found a fifth head, I started to cry,” she said, adding that she and her partner have a family history of multiples.

Doctors then noted how rare the quintuples are in the country, saying no record exists.

The Mail noted that the babies were born healthy with no complications.

Recent photos show that the children, who are now 6 years old, are healthy and thriving.

“The girl is named Tereza, the identical twins Michael and Deniel and we also have Alex and Martin,” 26-year-old father Antonin Kroscen said, according to News.com.au. “I’m very happy,” he added. The parents already have a young son.

It’s been a few years since her unique pregnancy, but it’s a once in a lifetime event.

Read More
Boyfriend of Woman Who Said She’s Expecting Reveals There Were No Quintuples
After Parents Learn They’re Adopting Triplets, They Get Some Big News From the Doctor
42-Year-Old Mom Gives Birth to Triplets, but Just Then Doctor Exclaims ‘More Feet’
Parents Snap a Photo With Their Newborn Triplets, but Look Carefully at the Kids’ Faces

According to News.com.au, doctor Alena Mechurova said after her delivery, “In this specific country, we have been actively recording statistics of birth ever since 1949 and in that time, there has never once been a mention of quintuplets. As a matter f fact, quintuplets are birthed in the Czech Republic once in every 480 years on an average.”

According to family planning website VeryWellFamily.com, “In 2005, the National Vital Statistics report for the United States reported the birth of 68 quintuplets and higher order multiples. Because this number includes the possible birth of sextuplets, septuplets or more, it is not determined exactly how many of those births were quintuplets. The spontaneous conception of quintuplets is rare, the average estimate is 1 in about 60 million births. Most recent quintuplet births are the result of assisted reproductive techniques such as fertility enhancing drugs or in-vitro fertilization.”

It continues: “Nearly all quintuplet pregnancies result in a cesarean delivery. The average birth weight of a quintuplet is about 2 pounds, 12 ounces and most quintuplets receive medical care in a hospital NICU (Neonatal Intensive Care Unit) until they reach their original birth date.”