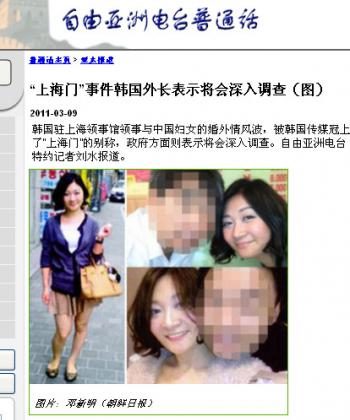 By Gisela Sommer and Sophia Fang
biggersmaller
Print
Three South Korean diplomats at the consulate in Shanghai are allegedly involved in a sex-for-favors scandal with a 33-year-old married Chinese woman, said by some news sources to be the granddaughter of the late Deng Xiaoping, China’s former paramount leader. Korean reports indicate the woman has obtained classified information including the phone numbers of high-ranking Korean officials.

Mrs. Deng Xinmin is married to a Korean national, referred to as Mr. J., who works in Shanghai. Mr. J. contacted authorities after he discovered sensitive information on his wife’s USB stick.

The three diplomats involved are only identified as Mr. H., Mr. K. and Mr. P.; all are in their forties. One of them is said to have resigned, the other two are being investigated.

On March 8 the South Korean Justice Ministry disclosed that Deng’s USB stick contained the telephone numbers of President Lee Myung-bak and his wife, numbers of 200 high-ranking South Korean government officials and congressmen, the emergency contact of the consulate in Shanghai, and records of issued visas.

Also found on the USB stick were petition letters from Chinese citizens to the consulate complaining about the visa issuing process being under Deng’s control. The letters say that it is extremely difficult to obtain a South Korean visa if one does not apply through Deng, and many difficult visa cases must be processed through Deng.

In an interview with South Korean News Agency Yonhap, Mr. J. said that he married Deng in 2001 in Shanghai and they have one daughter. He said that their family life was good until his wife decided to work. She started to spend a lot of time away from home and told him she was the secretary of the mayor of Shanghai. But sometimes she said she worked at the Police Department.

Mr. J. said that last year, when his wife’s affair with the diplomats became known in Shanghai, he started to look through his wife’s things and discovered intimate photos during an outing with a diplomat and a “love letter” from another diplomat. Mr. J. said his wife told him that her father had died and that an uncle of hers from Shandong Province had been transferred to Shanghai as Party secretary.

Kim Jeong-ki, former Korean consul general in Shanghai, also knows Deng. He said Deng is in the close circle with Shanghai’s Party secretary and mayor. Many consulate matters were done with her help, Kim said. Photos of Kim and Deng were also found.

Kim told Yonhap that he was not very close to Deng and that the photo was taken on June 1, 2010, when they bumped into each other at the Hilton. With regard to the number of other officials discovered on Deng’s USB, Kim admitted that the original file was his. Someone must have stolen it from his office, he said.

However, on March 9, Yonhap revealed a detailed analysis of the photos. The analysis showed that the pictures of Deng and Kim at the Hilton were taken at 6:55 p.m. and 6:56 p.m. on June 1, 2010. About two hours later, the same camera was used to make the file containing phone numbers of other officials. All these pictures were taken on the same day with the same Sony DSC-TX1 camera, and were stored in the same folder on Deng’s USB.

Based on these findings, Yonhap concluded that Deng was the one who stole the telephone number file from Kim’s office. The public is anxiously waiting for an explanation from Kim, it said.

The Korean government said it will conduct an investigation, while China’s foreign minister offered an apology.

Recently, Taiwan army Maj. Gen. Luo Xianzhe, when faced with allegations of spying for China, said he fell into the “honey trap” of a Chinese spy. Taiwan media said Luo is the highest-ranking officer suspected of espionage in five decades.