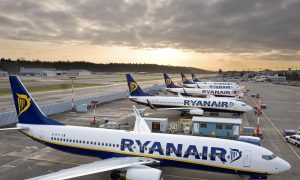 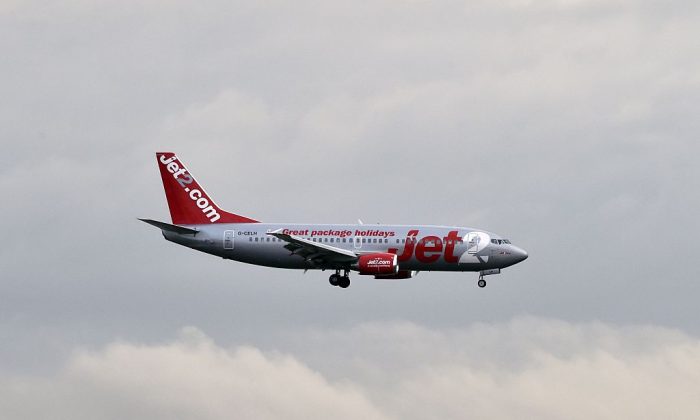 Woman Who ‘Stormed Cockpit’ On Jet2 Flight Hit With $100,000 Bill and Lifetime Ban

A British woman who allegedly tried to open the emergency door of a Jet2 flight shouting “I’ll kill you all” has been hit with a $106,000 fine and lifetime ban, reports said.

Chloe Haines, 25, was on a flight from London to Turkey on June 22 when she sparked mid-flight panic among other passengers by threatening to open the emergency door.

Crew and passengers had to intervene to prevent what they believed could have been a mid-flight tragedy and, according to an earlier report by The Epoch Times, at one point as many as six people held her down.

The Daily Mail posted the story on its social media pages, where it sparked emotional reactions.

“She should be jailed for 10 years and when she comes out spend the rest of her life paying the fine,” one person wrote.

“Her behavior is unacceptable,” another person wrote. “But let’s also add. It’s impossible to open an emergency exit whilst in flight. She’ll also never gain access to the cockpit since the cockpit door is locked and is bullet proof.”

Jet2 said in a statement that Haines had exhibited a “catalog of aggressive, abusive, and dangerous behavior” on the Dalaman-bound flight, including “attempting to open the aircraft doors during the flight.”

The British air carrier said it has billed Haines more than £85,000 ($106,000) after her “extremely disruptive behavior” forced a flight diversion and led to the Royal Air Force having to scramble two Typhoon fighters to escort the plane.

“In their rush to escort the aircraft,” Jet2 said, “the RAF fighter jets created a sonic boom which could be heard for miles around.”

Steve Heapy, CEO of Jet2.com and Jet2holidays said: “Miss Haines’s behavior was one of the most serious cases of disruptive passenger behavior that we have experienced.

“She must now face up to the consequences of her actions, and we will vigorously pursue to recover the costs that we incurred as a result of this divert, as we do with all disruptive passengers.”

Speaking to the The Sun, Amy Varol, 24, who sat two rows behind Haines on the flight to Dalaman, described the moment Haines “had her hands on exit door” before she was tackled.

“The woman was walking down the aisle when she literally ran to the exit door,” Varol said.

“She had her hands on the handle trying to open it. Luckily there were two cabin crew there who pulled her off the door.”

Varol, a community care worker, told The Sun the woman was restrained after she attacked fellow passengers and cabin crew, and later threatened to kill everyone.

“She started assaulting the two crew members, a woman and a man,” Varol recalled.

“Then a man sat on her and one person was holding her leg and someone else holding the other one,” she added.

“That’s when she started screaming ‘get off me, I’m going to kill everyone.'”

TWEET 1/2
So I get on a plane to turkey after being in the air for 45 mins some drunk lady (may be on drugs too) attacks the cabin crew and then tried to open the airplane door!! 6 people are holding her down, she’s screaming biting people and now she’s in a seat being held down

Varol described the incident as chaotic, with children crying and other passengers hiding at the back of the plane in fear.

“The whole plane started screaming as the crew tried to get her off the door. Everyone all of a sudden jumped up and panicked,” she explained.

Varol wrote on Twitter that she believed the woman was intoxicated and possibly on drugs, describing how she assaulted staff 45 minutes into the journey to Turkey.

“So I get on a plane to turkey after being in the air for 45 minutes some drunk lady (may be on drugs too) attacks the cabin crew and then tried to open the airplane door!!” Varol wrote.

“6 people are holding her down, she’s screaming biting people and now she’s in a seat being held down by 4 people and my brother and cousin,” she continued.

“It’s awful everyone’s screaming and crying. Now we’re back at Stansted waiting for the police to come and get her! I will get to turkey!”

by 4 people and my brother and cousin.. it’s awful everyone’s screaming and crying. Now we’re back at stansted waiting for the police to come and get her! I will get to turkey!!!

Witness Steven Brown from Romford, London, told The Sun: “She was punching, kicking and screaming at the stewards, they were trying to stop her but they had no chance.

“She was only petite but she had the strength of a fully-grown man. The only time I’ve seen anything like that was when someone had just dropped acid, she had super strength.”

After the flight was diverted back to London, Haines was arrested.

The Daily Mail reported the woman has a criminal record, including a 28-month driving ban for operating a vehicle while under the influence and convictions for three assaults.

Jet2 CEO Steve Heapy added, “As a family friendly airline, we take an absolutely zero tolerance approach to disruptive behavior, and we hope that this sobering incident, with its very serious consequences, provides a stark warning to others who think that they can behave in this fashion.”