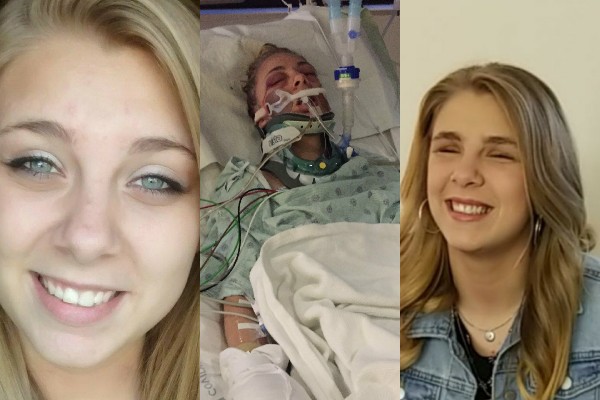 Kayle Muthart, who gouged her own eyeballs out while high on meth, is focused on the future, she said in a recent interview. (Kaylee's Story/GoFundMe)
US News

A 21-year-old girl who was left blind after a drug-fueled hallucination led her to remove her own eyeballs says she will not give up.

Kaylee Muthart, high on meth, gouged her own eyes out on Feb. 6.

“I thought I was sacrificing myself for the world,” she told WFMY in March. “It wasn’t voices, but I thought it was real.”

She said she started with marijuana that was, without her knowledge, laced with meth or cocaine. A few months later she began using meth and a range of other drugs.

“I want people to know they shouldn’t use drugs,” Muthart said. “It manipulates your thought process. Marijuana is a gateway drug. I used to think it wasn’t but it is.”

The South Carolina resident has spent the months between then and now recovering from the shocking episode and preparing for the future.

She spent weeks in a psychiatric facility, underwent surgery to ready her eye sockets for prostheses that are slated to be installed next year, and completed a month-long inpatient drug-treatment program.

While considering herself a recovering addict, she said she has no desire to use drugs again.

“The drugs took something from me, and when you get burned by the fire you learn not to go back,” she told People magazine.

Muthart has been spending time playing the piano and guitar and performed for her rehab group. She attends church regularly and has been learning how to do various things blind such as riding a bicycle. She also spends time with her toddler daughter, who lives with a family friend.

Early next year, Muthart will attend a school for the blind for two to four months, where she’ll learn to do a range of things despite not being able to see. The eye surgery is tentatively scheduled for late in 2019, and she hopes to become independent by that time. She said she’s embraced her blindness.

“If you don’t, you can never be happy. Accept it, analyze it and let yourself feel what you feel. I cry. Not a lot, but I bottle it up and then let it out,” she said.

This is the article that People Magazine has been working with us on for the past few weeks! They wanted to write about Kaylee because it's coming close to a year since she went blind! I thank… https://t.co/ETaESqw3Je

Her future dreams include being a motivational speaker or a musician, and she would also like to write a book. Her childhood dream of becoming a marine biologist is likely not possible now.

Her mother Katy Tompkins wrote on a GoFundMe fundraising page for her daughter that Kaylee was high on meth when she gouged her own eyeballs out and “had succumb[ed] to the evil of this drug.”

“Our family has had a very hard year. Many ups and many downs. But I really want to say that my sweet Kaylee is taking this much better than I am,” Tompkins wrote.

The expenses have added up as her parents have been supporting her since she can’t work, so her mother requested donations for Kaylee.

She sounded an optimistic note about Kaylee’s scheduled attendance at the blind school. “They will be driving her to be career motivated to go to college in order to support herself, which is the main goal!” she said. “I just wanted to let you guys know a bit that we have learned and been through the past year, almost! We appreciate every single one of you and your kindness, thoughts and graciousness in helping us through this.”