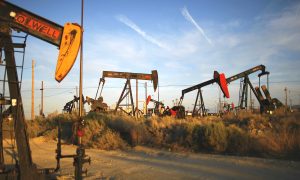 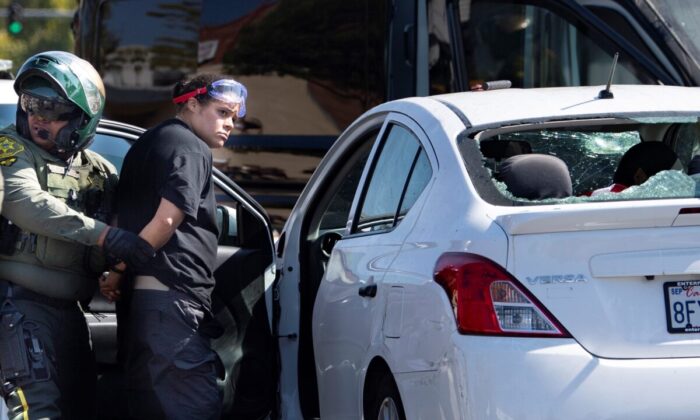 Tatiana Turner is taken into custody after witnesses said she drove her car into a crowd of President Donald Trump supporters in Yorba Linda, Calif., on Sept. 26, 2020. (Mindy Schauer/The Orange County Register via AP)
Crime and Incidents

A woman who was arrested and charged with attempted murder after driving through a crowd of President Donald Trump supporters in California on Sept. 26 has been identified as an event organizer.

Tatiana Turner of Long Beach was one of over 26 organizers of Sept. 26’s Southern California demonstration against “police brutality and systemic racism,” The Associated Press confirmed.

She was arrested in Yorba Linda, some 30 miles southeast of Los Angeles, after accelerating her parked car into a group of Trump supporters as one was taking a photo of her license plate. Trump supporters then smashed her rear windshield as she braked briefly before speeding away.

Anthony Bryson, who also helped organize the event under the Urban Organizers Coalition, told The Associated Press that Turner was “in fear for her life” at the time of the incident.

“People had broken her windshield,” Bryson said. “She was trying to leave.”

Independent videographer Tomas Morales said that Black Lives Matter protesters and Trump supporters involved in a counter protest had been forced to leave the protests from the same parking lot “as their only exit route,” leading to clashes between the two groups of protesters.

The 40-year-old was booked into the Orange County Jail on attempted murder and assault with a deadly weapon charges. Her car hit at least two people in the parking lot of the Yorba Linda Public Library.

“A male adult suffered two broken legs, and one female adult suffered moderate injuries,” Orange County Sheriff’s Department Sgt. Dennis Breckner told reporters. Both were transported to a nearby hospital and are expected to survive.

Morales identified the injured man as a Trump supporter.

The Urban Organizers Coalition in a statement extended its “heartfelt sympathies” to the injured man and woman.

At the time of her arrest on Sept. 26, Turner was wearing a black t-shirt that had “#Caravan4Justice” written on it.

“Caravan 4 Justice is a grassroots campaign dedicated to educating, organizing, and mobilizing our community,” the campaign states.

Caravan for Justice didn’t respond to previous requests for comment, but had said that the march was to “combat racism.”

The Long Beach Post in July identified Turner as an organizer for the local Caravan for Justice group—a group that advocates the message of the Black Lives Matter movement. At the time, Turner was reported to have been addressing Black Lives Matter protesters, telling them that BLM must not be turned into a brand.

“We have to make sure that we continue unity with all of us,” she told those gathered.

According to federal records cited by The Daily Mail, Turner had also filed a trademark application for the group as its owner in July and was described in a GoFundMe campaign as “the incredibly gifted founder” of Caravan for Justice.

Turner is being held on $1 million bail and has a scheduled court appearance on Sept. 29, a county website states.

The Epoch Times has reached out to the Orange County Sheriff’s Office for comment.

Interactions between drivers and people during demonstrations have become common in recent months. Several drivers were attacked by protesters in Hollywood late Sept. 24, police said. The drivers were released without charge and an investigation is ongoing.