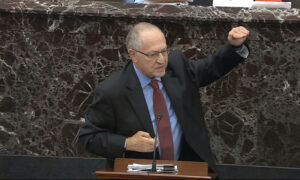 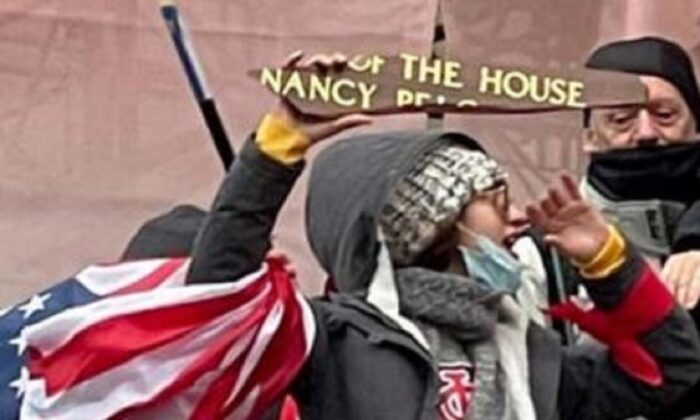 A woman identified by the Federal Bureau of Investigation as Emily Hernandez is seen holding a nameplate taken from House Speaker Nancy Pelosi's office in the U.S. Capitol in Washington on Jan. 6, 2021. (FBI)
Crime and Incidents

The woman who was spotted holding House Speaker Nancy Pelosi’s (D-Calif.) nameplate during the Jan. 6 breach of the U.S. Capitol has been charged.

Emily Hernandez was seen inside the Capitol holding the nameplate, according to an image published in a court filing from the FBI.

At least three tipsters contacted the bureau after seeing the image broadcast by a news outlet. One recognized Hernandez through their association on social media; a high school friend of Hernandez confirmed the woman’s identity to the FBI.

A different photo showed a woman the FBI says is Hernandez outside the Capitol on Jan. 6, holding the nameplate and an American flag.

FBI agents found that Hernandez posted a video to her Snapchat showing her inside the Capitol and holding the nameplate. They also received photos appearing to show Hernandez at the scene.

The nameplate is estimated to cost $870 to replace.

Hernandez was hit with five charges on Jan. 15, including illegally entering the Capitol, disorderly conduct, and stealing a thing of value of the United States. She faces jail time if convicted.

Hernandez couldn’t be reached for comment; she hasn’t retained a lawyer, according to information about the case from the U.S. District Court for the District of Columbia.

Hernandez is one of five women to be charged with participating in the Capitol breach, according to court records.  Authorities have arrested over 125 people and have identified more than 200 suspects.

Pelosi told reporters last week that the Capitol breach was “an armed insurrection against America.” She led the House in impeaching President Donald Trump over claims that he incited the breach. Trump and his supporters have defended the president, noting that he on Jan. 6 called for protesters to demonstrate peacefully.

A Colorado man, meanwhile, was charged last week after authorities say he threatened to kill Pelosi.

Cleveland Meredith drove to Washington with guns and ammunition, authorities said. He was ordered held without bond, pending trial.