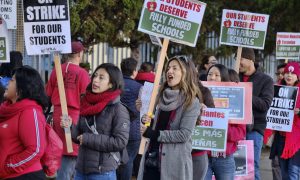 Woman Who Allegedly Dumped Seven Puppies in Coachella Is Arrested

A 54-year-old woman was arrested after she was caught on surveillance footage placing seven puppies in the trash in Coachella, California, according to officials.

Deborah Sue Culwell, 54, was arrested on April 22 in Riverside County, according to NBC Los Angeles. She was silent as officers led her away from her home.

Several days ago, she was allegedly seen on surveillance video dumping seven puppies that were only days old into a dumpster behind an auto-parts store.

Officials said they were able to identify her by her license plate number, the NBC affiliate reported.

Good Samaritans rescued the puppies in the 90-degree heat after a homeless man heard the dogs in the trash, according to the report.

While at her house, authorities also discovered approximately 30 dogs inside, which were all taken into custody and are currently being cared for at a shelter.

“You can clearly see the bag of puppies being dumped into the dumpster,” said John Welsh, the head of the Riverside County Department of Animal Services. “There’s clearly not a level of intelligence that’s going to be used if you’re going to toss animals.”

Riverside County Animal Services’ Senior Public Information Specialist John Welsh said that officials found 30 dogs inside Culwell’s home, and they were all taken into custody, People reported. Walsh said they’re being cared for at a shelter.

“We do feel strongly that this rises to a felony of animal cruelty and when we submit our case to the District Attorney’s office, we do believe we’ll be successful in pursuing seven counts of animal cruelty,” he told the news outlet.

A news release from the sheriff’s office said that the puppies probably wouldn’t have survived if the good Samaritans hadn’t acted.

“If not for the Good Samaritan’s actions, the puppies may not have survived much longer,” the release said. “The mid-day temperatures in Coachella on Thursday were in the mid-90s range.”

“There is no excuse for dumping puppies,” the release added. “Especially in today’s age when we or other shelters would be willing to get these animals to foster parents or rescue partners. This was a shameful act.”

Welsh told People that officials made sure to recognize the homeless man who noticed the animals.

“The bag being tied shut on a day where temperatures were in the mid-90s in Coachella—the likelihood that those pups would’ve survived if not for that passerby would’ve been impossible, if not for that person recognizing that something was wrong,” he noted. “I think the puppies were yelping or crying and that’s what attracted him to the trash can.”

“Folks were really shocked by the total disregard for the puppies’ lives,” Welsh continued.

“Accumulating empirical evidence is demonstrating a strong association between animal cruelty and other crimes, including interpersonal violence, illegal possession of drugs and guns, and property destruction,” researchers stated. “Moreover, participation in animal cruelty in childhood is a significant marker for the development of aggressive and anti-social behavior, as well as a predictor of individuals who might engage in domestic violence.”