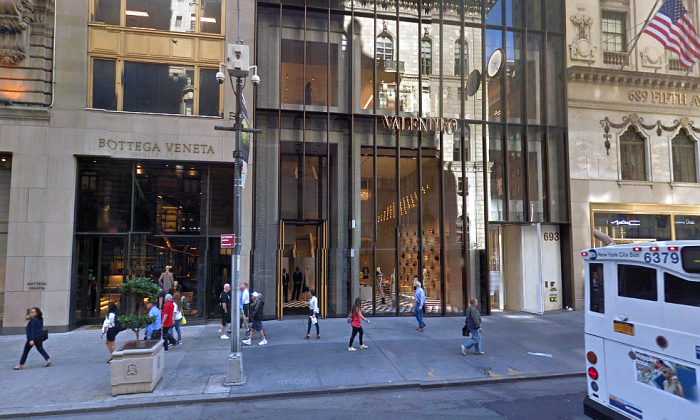 Valentino on 5th Avenue in New York City. Police have released surveillance footage of the man suspected of burning the blouse of a Muslim woman on Sept. 10. (Google Maps)
Crime and Incidents

A woman wearing a traditional Muslim garb was set on fire in Midtown Manhattan, police said on Monday.

According to the New York Daily News, the NYPD said the victim put out the flames on the sleeve of her blouse. She wasn’t injured in the Saturday night incident.

The suspect in the alleged incident escaped, and the NYPD’s Hate Crimes Task Force is investigating to determine if was an anti-Islamic motivation.

The woman was shopping at the Valentino store on 5th Ave. near E. 55th St. at around 9 p.m., police said. A source told the Daily News that she felt heat around her arm, realizing she had apparently been set alight.

“She saw [the suspect] pull a lighter away and walk away,” the source told the newspaper. “He doesn’t say anything.”

Last week, a 32-year-old Brooklyn woman was charged with hate-crime charges for allegedly punching and kicking two Muslim women wearing veils who were pushing baby carriages in Bath Beach. The suspect, named Emirjeta Xhelili, also yelled: “Get the [expletive] out of America … you don’t belong here.”

In a statement, the Council on American-Islamic Relations said it has “condemned [an] attack on a Muslim woman in which her clothing was set on fire, the latest in a series of attacks on Muslims in that state and nationwide in recent days and months.”

“We are clearly seeing a spike in attacks on individual Muslims and Islamic institutions in New York and around the country, which should be of concern to all Americans,” said CAIR-NY Executive Director Afaf Nasher said in the statement. “It is time for the mayor and the NYPD to put forward the necessary resources to investigate and prevent these attacks on the Muslim community.”

Muslim pilgrims begin hajj, but this year without Iranians