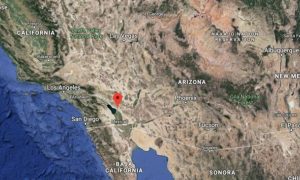 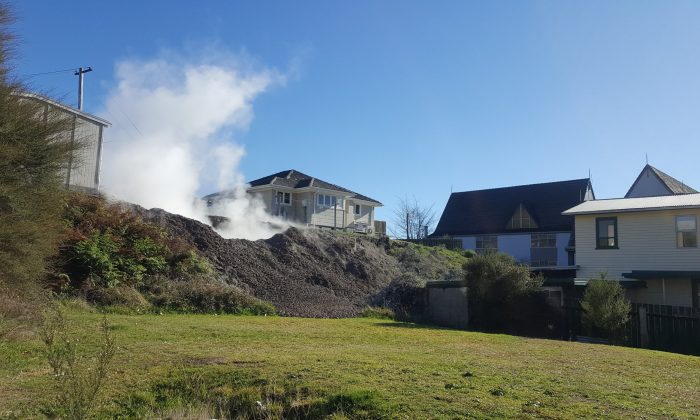 The Geyser which sprang up overnight on the lawn of a house in Rotorua, New Zealand on June 26. (Facebook/Rotorua Lakes Council)
Australia

Woken by shaking and noise in the middle of the night, Susan Gedye headed downstairs, thinking an earthquake had struck her town in the north of New Zealand.

But as she went into the kitchen the noise got louder. Then she spotted the windows had steamed up.

Looking out into the back garden, Gedye saw a geyser had sprung up overnight and was now spewing steam and mud over the kitchen walls as it grew in size.

The family has had to move out due to the risk of the house collapsing.

The newly-formed hot pool in Gedye’s garden was growing in size by the hour, she told RNZ.

By the following morning, June 26, it had turned into a “huge mud geyser” saying it was “kind of spectacular” and “a little bit scary.”

“It’s like a huge big crater in the front lawn and there’s mud flying like about 10 meters into the air,” she told the radio station.

Gedye said she had woken to shaking and jolting at about 2 in the morning, thinking “oh there’s a huge earthquake happening here.”

Heading into the kitchen, the sound got louder.

“Then could just really hear it and just thought something is not right here,” she told the New Zealand Herald. “Looking out the kitchen window [I) saw this big geyser coming out of the bank it was like a big pile of steam.”

“I panicked, it was shaking everything … I wasn’t sure what was going on.”

Read More
Yellowstone’s Tallest Geyser Breaks Its Own Record, Scientists Aren’t Sure Why
Noisy Yellowstone Geyser Erupts for the First Time in Years

The council told her she was fine to stay in the house for the night.

But in the morning, things had really changed, she said, and the family had to evacuate due to the possibility of a sinkhole falling under the kitchen meaning the house could fall away.

“There was mud flying everywhere, the bank had come away and the engineer said it might be time to go.”

“There are a few cracks around the place and everything is kind of on a lean,” Gedye said.

The Rotorua Lakes Council confirmed in a statement that the family had moved out, posting regular updates and images to its Facebook page.

According to the council, a similar event in 2016 lasted 10 weeks before the newly-formed geyser ran out of steam.

“There is a fault line running under the bank where the mud pool has formed,” said the council statement. “Sometimes heat flow from the Whakarewarewa Village travels along the fault line and comes to the surface.”

One local wrote on the local council Facebook page, “I remember many years ago a lady called Mary was hanging out her washing when the ground gave way and she fell into a hole of boiling water and she was horribly burnt.”

The city of Rotura lies on the northern side of New Zealand’s North Island.

The city is nicknamed “Sulphur City” after the rotten-egg smell of hydrogen sulfide emissions that accompany geothermal activity such as the hot springs and bubbling mud pools which are popular with tourists.

But whilst it carries risks for the locals, Rotorua, like other locations in New Zealand, is popular with tourists precisely because of the geothermal activity which produces mud pools and geysers.

The name geyser comes from the Icelandic geysir, which is a name given by Icelanders in the 17th century to refer to a hot spring in southwestern Iceland, where many tourists also go to experience the geothermal sights.

Around half of the world’s known 1,000 geysers can be found in Yellowstone park, also home to the world’s tallest—Steamboat Geyser.

The geyser sped up its eruption cycle in June and set a new record for intervals between eruptions, the Billings Gazette in Montana reported.

The geyser’s shortest break between eruptions took place on June 15 when it blasted three days, three hours, and 48 minutes after its previous eruption, the paper reported.