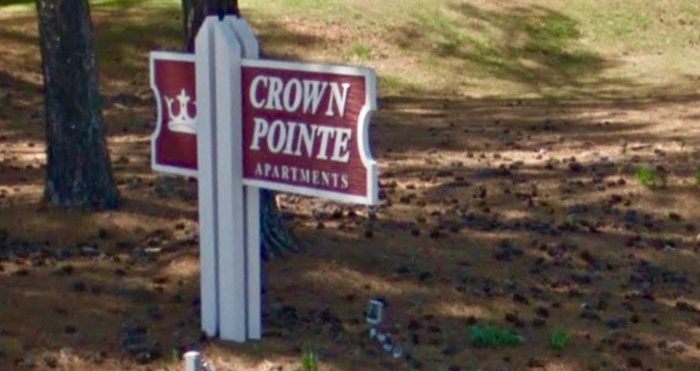 Crown Pointe Apartments, the site of a Christmas Eve fire where 54 people were displaced in Spartanburg, South Carolina on Dec. 24. (Screenshot via Google Maps)
US News

A woman threw her baby nephew out of a third-floor window while her family fled a Dec. 24 fire that destroyed or heavily damaged 17 units of an apartment complex.

Ashley Yates was desperate as the fire left few exits safe. A stranger passing below told Yates to drop the 6-month-old after seeing she was in need of help, according to WYFF. The baby was safely caught by the man, who told Yates his name was Reginald, GoUpstate.com reported.

“I was so terrified. He was like ‘Just get out. Throw him. I will try my best to catch him,’” said Yates, describing the critical moment, via WYFF.

Yates also made her 9-year-old and 12-year-old daughters jump from the balcony before jumping herself. A firefighter brought her mother out of the building with a ladder truck, GoUpstate reported. Everyone escaped unharmed.

“She just told me to jump because she would rather me jump out the window than get burned,” Yates’ daughter told WYFF.

Fifty-four people had to leave the Crown Pointe Apartment Homes in Spartanburg, South Carolina because of the fire. They are now spending Christmas in the First Baptist Church Spartanburg, which is acting as a Red Cross shelter, according to GoUpstate.com.

“We were eager to provide a safe, warm refuge for these families in need,” said church member Lucy Sizemore, via GoUpstate.com. “It’s heartbreaking these families have had such a loss at this time.”

“It breaks your heart on Christmas Eve, but shows you how good people really are. We’ve had people bringing in towels and shoes and coats and they’re wrapping children’s Christmas gifts and whatever they need they come through with,” said Jeanna Knoll with the Red Cross, via WYFF.

The fire started around 5:50 AM on the morning of Christmas Eve. Five local fire departments responded. Nobody died from the fire, but one person was taken to a medical center for smoke inhalation, according to GoUpstate.com. The fire has been ruled an intentional act, but no suspects are in custody, WSPA reported.