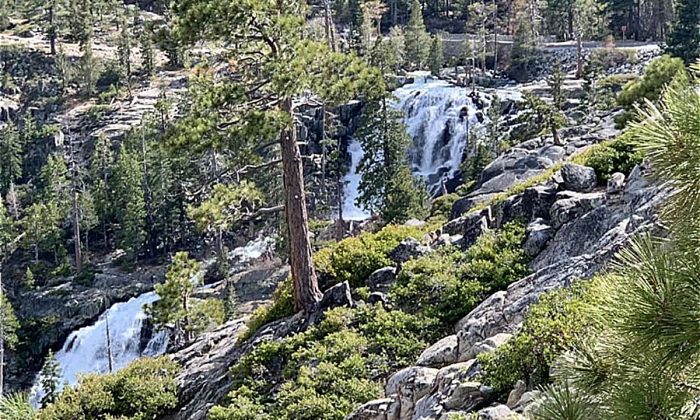 Eagle Falls where a young woman fell to her death while taking a selfie. (North Tahoe Fire Protection District)
Crime and Incidents

Woman Taking Selfie at a Waterfall Loses Her Footing, Falls to Her Death

A woman in California fell to her death over the edge of a waterfall while taking a selfie on May 31.

Crews from the Tahoe Truckee Regional Rescue Team recovered the body of the young woman from Eagle Falls in Emerald Bay, according to a statement released by the North Tahoe Fire Protection District on their Facebook page.

“Crews from the Tahoe Truckee Regional Rescue Team responded to Eagle Falls in Emerald Bay to recover the body of a young woman who was taking photos at the falls, lost her footing, and went over,” the statement said.

“Please avoid the area while emergency personnel complete the investigation. This is a sad reminder to be cautious when taking selfies and other photos in dangerous areas,” said the statement.

Authorities didn’t provide any information about the identity of the deceased or the specific circumstances of the death or any other details.

In a similar incident, a woman in Russia who allegedly climbed onto an electricity transformer to take a selfie ended up electrocuted and burned to death.

Witnesses cited in a report by The Sun said local police near the village of Kuznetsy were still trying to identify the woman’s badly burned body.

The only description of the victim released by police is that the woman was 5 feet 6 inches tall.

A phone was found near the scene, which is located about 50 miles east of Moscow, according to the report.

Olga, a witness, was cited in the report as saying: “Most likely she decided that she wouldn’t touch anything and nothing bad would happen. But it is enough only to climb on the transformer structure to get a severe electric shock.”

Police said there have been no reports of women missing in the area that fit the victim’s description. They have appealed to the public for help identifying the mystery woman.

Selfie deaths are an epidemic, according to a report in the Journal of Family Medicine and Primary Care that says 259 people died in selfie-related 137 accidents from 2011 to 2017.

The study says women take more selfies than men but since men take more risks, they report more injuries and deaths—153 of the total selfie-related deceased were men.

The highest number of selfie-related deaths, about 50 percent, have been reported from India, followed by Russia, the United States, and Pakistan.

“Termed ‘killfies’ by some social media researchers, these accidental deaths have involved social media personalities and, of course, adventurers,” said a report on Outside Online.

Jon James McMurray, a Canadian rapper, died last year while taking a selfie at the wing of a Cessna while filming a music video.

Gigi Wu, an experienced celebrity hiker from Taiwan, fell to her death while taking a selfie in Taiwan’s Yushan National Park, home to a series of 10,000-plus-foot peaks. She was trying to take a selfie while attempting a summit and fell 60 to 100 feet and landed in a remote ravine, according to Outside Online.

“For each of these recorded deaths, there are also thousands of near misses (misfies?),” the Outside online report said.

The report in the Journal of Family Medicine and Primary Care says the enhancement of phone features is also leading to increasing selfie-related deaths.

“Usually the youth and tourists are frequently affected because of the desire of ‘being cool,’ posting photos on social media, and getting rewards in forms of likes and comments. Selfies are themselves not harmful, but the human behavior that accompanies selfies is dangerous,” said the report.

The report highlights the need for educating people about where selfies should and shouldn’t be taken. “No selfie zones areas should be declared across many tourist areas especially places such as water bodies, mountain peaks, and over tall buildings to decrease the incidence of selfie-related deaths,” it said.