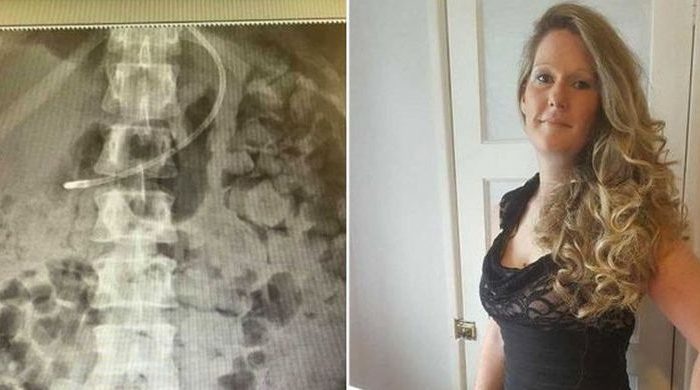 Woman ‘Suffocating’ From Own Waste After Routine Surgery

After a British woman underwent a routine operation, complications from the surgery may kill her.

Kelly Yeoman, 34, underwent a minor keyhole surgery to remove a fluid-filled sac on her ovary. Two weeks later, she was re-admitted after it “exploded” and she was told she has a bowel infection, according to media reports.

The operation failed to fix the issue and now, according to the BBC, her body is “filling with her own feces.”

Friend Peter Rankin, who fears she may not survive, said that she’s “slowly suffocating” at Bristol’s St Michael’s Hospital, where she was admitted in August.

“She is almost unrecognizable as our happy, strong and determined friend,” he said.

Yeoman described the feeling as “literally just being crushed by myself,” the BBC reported.

Yeoman added that doctors informed her that her case is the most complex they’ve seen as she is allergic to many types of medication.

Uploading an image of her X-ray on Facebook earlier in November, she wrote: “For those who don’t quite understand the extent of my condition, this is my X-ray, the whole thing is a picture of faecal loading can’t even see my organs.

“And yes it’s all in my chest too, my diaphragm and lungs are so high up I can barely breathe,” she added.

Friends are trying to raise money via GoFundMe to have her get treated at a specialist center in London, saying that it’s time for a “specialist intervention.”

Carolyn Mills, who is the head nurse at University Hospitals Bristol NHS Foundation Trust, told the BBC, “We are so sorry to hear that Kelly Yeoman has concerns and questions about her treatment at St Michael’s Hospital.”

“She has not raised these with us since she had the procedure in August and this means that we’ve not had the chance to either talk to her or investigate those concerns. We will now contact her to take this forward.”

Kelly Yeoman’s organs are barely noticeable on an X-ray as her chest cavity fills with faeces, leaving her struggling to breathe. WARNING: Graphic https://t.co/CNd3cmseDN pic.twitter.com/lp8egwkEFz

Her friends praised the hospital, but they said that more needs to be done.

“She’s sending people messages in the middle of the night saying the pain is unbearable. This is a woman who should be enjoying every moment of her life, not lying helpless in a hospital bed, drowning in poo,” Yeoman’s friend Kate Rankin told The Mirror.

According to the GoFundMe: “This is absolutely not a rant about the NHS or an attack on Southmead Hospital. On the whole, Kelly has been treated kindly and well, but she is now in a critical condition and needs one to one, specialist intervention. We would desperately like to get her admitted to St Mark’s Hospital, London (Specialist Bowel Hospital) as a private patient, so she can get the help she so urgently requires.”