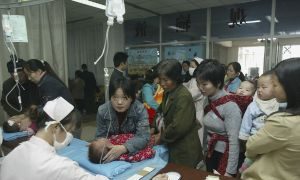 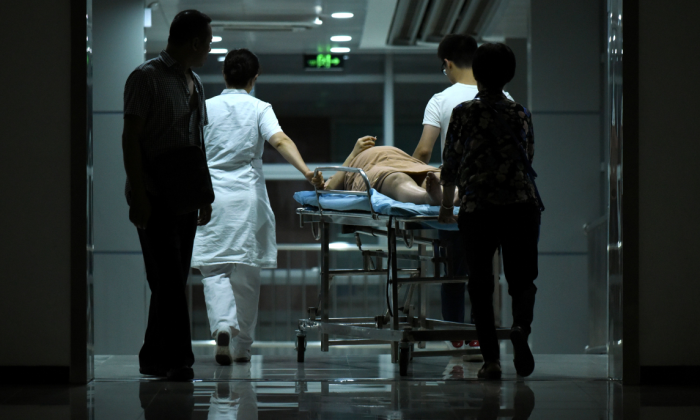 A pregnant woman on a stretcher in a hospital in Beijing, China. (Wang Zhao/AFP/Getty Images)
Social Issues

A woman who suffered from severe bleeding and a coma after giving birth to a baby boy was presumed to have been abandoned by her husband, according to Chinese media ThePaper.cn.

The woman, named Duan Yingying, suffered from paralysis after waking from the coma. Her husband, whose name was not given, claimed he would go to raise money for hospital fees. He took $45,000 that came from selling their house and left his family on Feb. 27. He has not been heard from since.

Duan’s parents contacted the local authorities in Shaanxi Province, China on March 8 to report their missing son-in-law, but the police did not want to get involved because it was considered to be a family dispute.

According to ThePaper, Duan’s parents described her as a healthy woman. She graduated from college, and lives in Shaanxi Province, China. She later found a job, and met her husband. They married after knowing each other for one year.

On Oct. 22, 2018, Duan gave birth to a baby boy. However, due to heavy postnatal bleeding, Duan fell into a severe coma. She was transferred to another hospital and eventually resuscitated, but the report says that her recovery would take a long time.

The parents said that at the time of the report, Duan was still hospitalized and they had spent $30,000 on her hospital fees. Since the couple had no savings, all of the money came from the parents, other family members and friends.

The family even sold the house and made $45,000, which was going to be used to pay Duan’s hospital fees. All the finances were being handled by her husband.

However, on Feb. 27, the husband said he had to go out to take care of some things. He left the hospital, and he has not been heard from since. He also took the money with him.

Duan’s father, Duan Yanmin, said that they could not find his son-in-law. Yanmin said that they’ve been left in the hospital with a four-month-old baby, their paralyzed daughter, and no money.

Yanmin and his wife went to the local authorities on March 8 to report their son-in-law. However, the Chinese police said that this was considered a family dispute, and they would not accept the case at that time.

The family has contacted a lawyer. The lawyer said that if their claims can be verified through investigation, then the son-in-law would bear certain responsibilities for his actions.

During the Lunar New Year, which often occurs around the end of January to the beginning of February, instances of people stealing money intended for medical fees is more common.

According to the Chengdu News, A 58-year-old man name Wang Wenhua was diagnosed with Aortic dissection. This health problem occurs when the main artery to the heart tears, according to the Mayo Clinic.

However, his own son stole $13,000 that was saved for the operation, and disappeared.

Another instance, reported by the Chinese regime’s television mouthpiece CCTV, was of a father stealing money from an operation for his son. In 2018, the boy was two years old, and the father took $9000, and vanished.

China often has large hospital bills that most patients must foot themselves.

In one recent example, a nurse threatened to pull a patient out of the operating room because the family was unable to pay the medical bills right away. The nurse said the only way the operation would continue was if the family paid the fees in full within 10 minutes. Based on the reactions of the relatives, the bill may have been over $75,000.

In this way, Chinese hospitals are often seen by citizens as for-profit entities. Some hospitals have used far worse means to make money.

Since 2001, certain hospitals at the order of the Chinese Communist Party (CCP) have taken part in forced organ harvesting. Most of the organs are sourced from unwilling prisoners of conscious, primarily believers of Falun Gong.

Falun Gong, though peaceful, introspective, and completely non-political, has been at the heart of a faith-based crackdown by the Chinese regime since 1999.

A booming organ transplant industry has thus secretly grown in China, and political prisoners are executed through operations to supply unknowing transplant recipients. The killings have been uncovered by independent research in recent years.