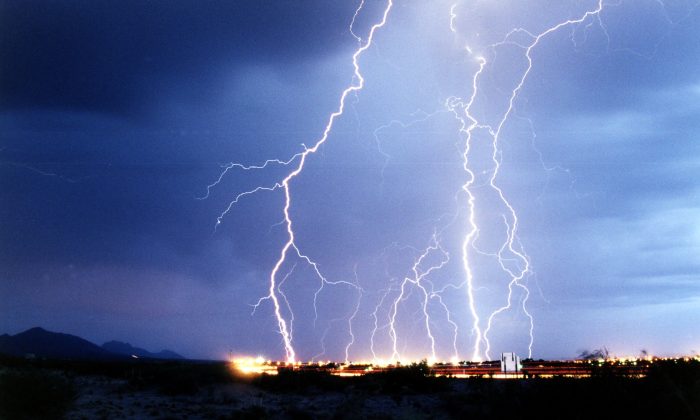 Woman Struck by Lightning in Her Kitchen

A Georgia woman was just cooking in her kitchen when the whole world went blank—she was struck by lightning, she said.

Tesia Swearingen, of Gainesville, Georgia, decided to open a door to the outside in her kitchen to listen to a thunderstorm on Monday, Aug. 14.

“We always have the doors open. We love listening to the thunderstorms,” she told WSB-TV.

But suddenly everything turned white.

“I felt this jolt of electricity come out the tips of my fingers and there was a loud pop and spark,” she said. “I was very dizzy and lightheaded and, yeah, I was electrocuted.”

Her heart was racing. “It took me a minute to catch my breath, I had very rapid shallow breathing,” she said. “Once the adrenaline wore off that’s when the pain set in. My heart ached, my chest hurt, and it hurt to breathe,” she told The Epoch Times over Facebook.

“They ran an EKG, came back normal. They did blood work to check if the electricity affected my muscles or caused my blood to clot, it all came back fine. Then they took a few x-rays and they came back normal as well. I had a clean bill of health. They gave me some ibuprofen for the little bit of pain in my chest then sent me home,” she said.

She had no physical marks either.

“I don’t have any burns or anything like that where the lightning came out,” she told the TV. “There’s not a lot of people who can make it out completely unharmed and be able to tell their story because that was a lot of electricity.”

Myths and Facts of Lightening Strikes

Swearingen’s case can be used to dispel multiple myths about lightning strikes.

“Most people believe they are immune from lightning strikes when inside a building. However, a number of injuries occur to persons who are in their homes or places of employment,” wrote Dr. Mary Ann Cooper, emergency physician and a leading expert on lightning injuries and safety, in a paper she coauthored in 2007.

“Side flashes strike people through plumbing fixtures, telephones, and other appliances attached to the outside of the house by metal conductors,” the paper explained.

Cellphones, however, do not attract lightning.

It is also unlikely the opened door had any effect on the lightning strike in Swearingen’s case, Cooper told The Epoch Times.

Swearingen was standing by her stove and said she was holding a metal spatula and may have been touching a pan on the stove. Since stoves are connected to electrical wiring, it is more likely the lightning struck the house or near the house and the current traveled through the wiring to hit Swearingen, Cooper said.

Another myth is that a lightning strike is necessarily fatal or even reduces a person to a pile of ash.

“In reality, lightning often flashes over the outside of a victim, sometimes blowing off the clothes but leaving few external signs of injury and few, if any, burns,” the paper reads.

Perhaps as few as 5 percent-10 percent of victims are killed by the strike, she wrote, usually by cardiac arrest. Many, however, suffer injuries like seizures, deafness, blindness, amnesia, and sometimes burns and brain damage.

Sometimes, the effects come later in the form of memory problems, loss of attention, chronic pains, and seizures.

For safety, the paper recommends the 30-30 rule: If you hear thunder after seeing a flash before you can count to 30, the storm is closer than about 6 miles and close enough for a lightning strike to reach you.

The only safe places from a lightning strike are buildings with grounded wiring and plumbing that, if hit, leads the current to the ground. Another option is a car with a solid metal roof (not a convertible). One may marginally decrease the risk by not being at the very top of a mountain. But there are no safe places outside, Cooper stressed.

Golf shelters, bus shelters, and garages might increase the risk of an injury from a lightning strike. A wooded area is just as safe or unsafe as an open one. Removing metal accessories or having rubber soles makes no difference.

Among all the places in the country, Florida has the highest concentration of cloud-to-ground lightning strikes—over 28 per square mile a year.